The Southern Highland Craft Guild is committed to the health and safety of our staff, volunteers, partners, artists, and community. While our brick & mortar stores are closed, our online shop is still in operation. We will continue to evaluate a potential re-opening date as we closely monitor the status of COVID-19. Group events and craft demonstrations scheduled through May have been cancelled. Check our website or Facebook page for the latest information.

Editor's Note: This post is part of a series called "From the Archives" - a look back at the people who served and helped shape the Southern Highland Craft Guild. The author of the series is Bonnie Krause. Bonnie works at Allanstand Craft Shop and volunteers in the
SHCG Library.

Fannie Rebekah Mennen was born in Riga, Latvia, in 1903, child of Rabbi Ephraim Mennen and Naomi Atlas Mennen.  She arrived in Chattanooga, TN, at eight months old when her father was asked to lead the oldest synagogue in the city.  When she was a year old she contracted polio and suffered multiple surgeries in her youth leaving her disabled.
Mennen attended George Peabody College for an education and music degree in 1929.  In 1945 she completed studies at Columbia University to receive a Master's degree in art teaching.  She studied art in night school and summer sessions at the University of Tennessee at Chattanooga and the University of Cincinnati.  She was awarded a Ford Foundation Fellowship in 1953 to travel to Haiti.  She taught art in public schools in Chattanooga for thirty years, then retired in 1961 to pursue her own craft.
She moved to her Plum Nelly home, two log cabins joined by a dogtrot, and acreage on a rocky bluff of Lookout Mountain, Georgia, on the southwestern edge of Chattanooga in 1934, buying land over time with her teacher's salary.  It took years to remodel her home.  She based the home's name on the expression "Plum out of Tennessee and Nelly out of Georgia."
Mennen practiced print making and was well known for her block printed trapunto pillows with images stuffed and quilted adding a three-dimensional effect.  She gouged and cut both woodcuts and linoleum blocks and mixed her own dyes preferring black, brown, orange and green.  she also produced note cards, wall hangings, and tote bags.  Her designs included wildflowers, trees, and Appalachian animals.  She also used Mimbres, the cartoonish black animal figures on white pottery from Pre-Columbian Southwestern Indian pottery.  Her love of paper compelled her at times to print on up to twenty varieties of paper.
In 1947 Mennen and sponsored the Plum Nelly Clothes Line Art Show at her home.  The show attracted over thirty fellow artists in painting, jewelry, wood carving, print making, pottery, weaving and other arts.  It was staged on her property, up a winding road in grassy meadows and under tree branches, with trails of wood chips.  Over 18,000 customers attended the show which continued for 27 years into the 1970s.
Mennen became a member of 12 Designer Craftsmen, a cooperative gallery in Gatlinburg, TN.  Her work also sold through her sister, Mrs. Celia Marks, at her Plum Nelly Shop in Chattanooga.  Mennen entered the Southern Highland Craft Guild in 1959, often demonstrated at the Craft Fairs, and became a life member in 1983 until her death in 1995.  She also demonstrated print making at Callaway Gardens, GA, in 1976 through Guild sponsorship.  Mennen voiced her love of teaching and sharing art, "I discovered I could bring art out of other people." 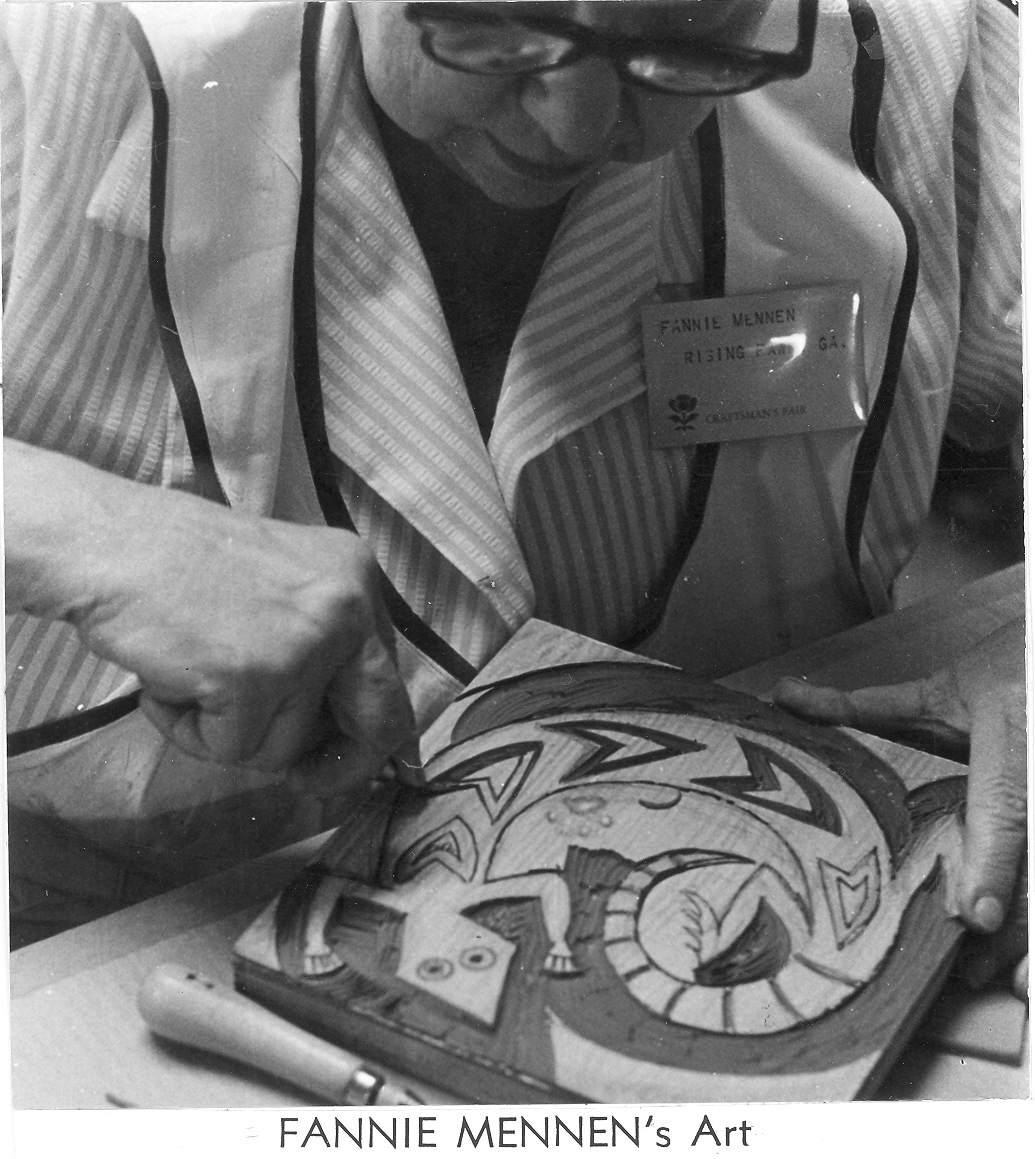