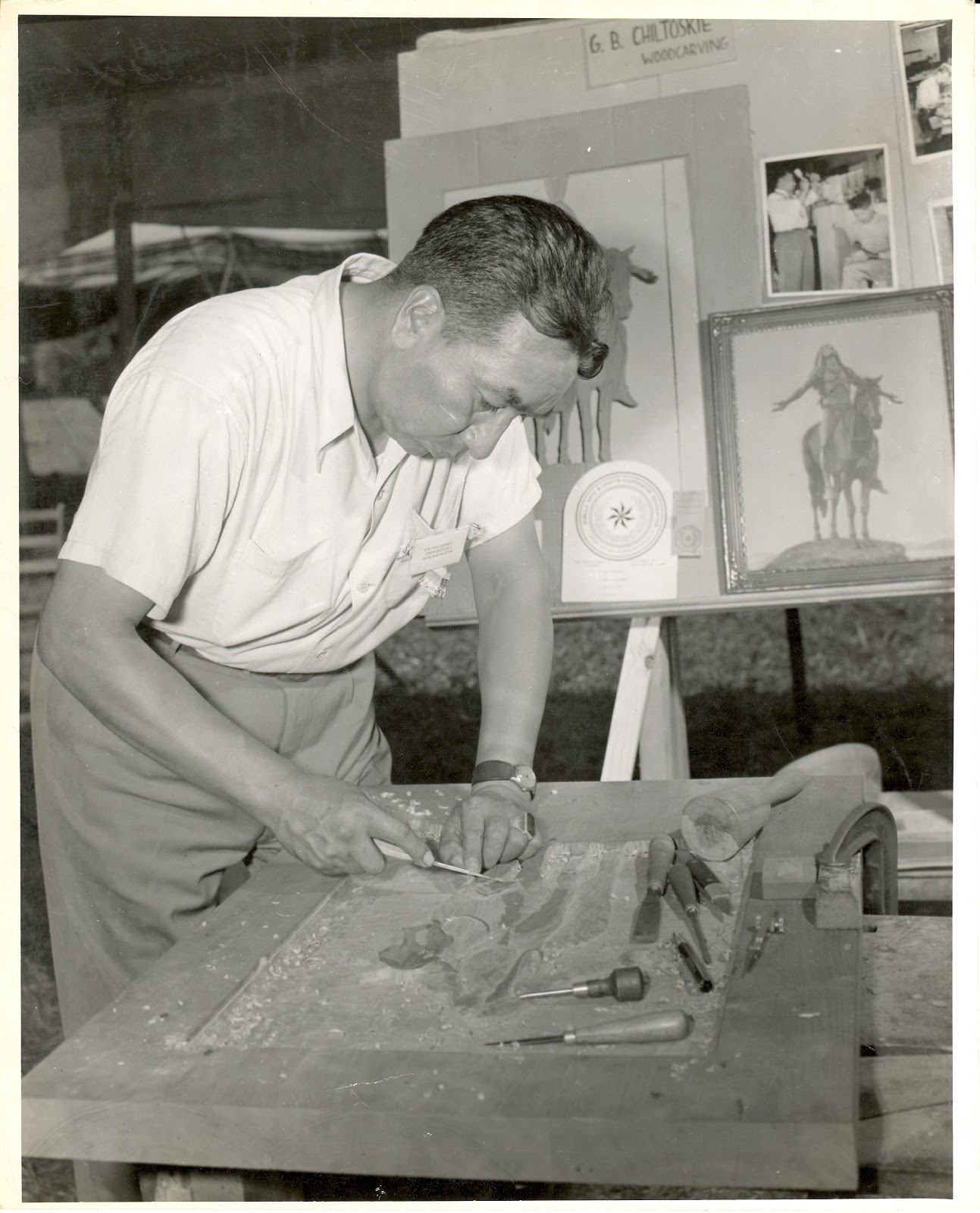 Editor’s Note: This post is part of a series called “From the Archives” – a look back at the people who served and helped shape the Southern Highland Craft Guild. The author of the series is Bonnie Krause. Bonnie works at Allanstand Craft Shop and volunteers in the
SHCG Library.  Goingback Chiltoskey, known as G.B., was born on the Cherokee Qualla Boundary in 1907.  He learned woodcarving from his brother Watty and then participated in the woodworking program during high school in Greenville, SC.  In the later 1920s and early 1930s he completed high school and studied carpentry at the Haskell Institute in Lawrence, KS, now the Haskell Indian Nations University.  He went on to attend the U.S. Indian School, later known as the Institute of Ameircan Indian Art, focusing on jewelry from 1933 – 1935.  Throughout his life, Chiltoskey continued to study crafts at Penland School of Crafts, Oklahoma A and M Univeristy, Purdue University, and the Art Institute of Chicago. Between 1935 and 1940, Chiltoskey taught woodworking and carving at the Cherokee HIgh School.  He also tutored his niece, Amanda Crowe, who eventually became a nationally recognized wood sculptor.  During World War II, Chiltoskey became a model maker for the Army Research and Development Laboratories in Fort Belvoir, VA.  After the war he continued making models for movie sets and architects and then returned to the Qualla Boundary to teach veterans.  From 1954 to 1966 he continued model building for Fort Belvoir. 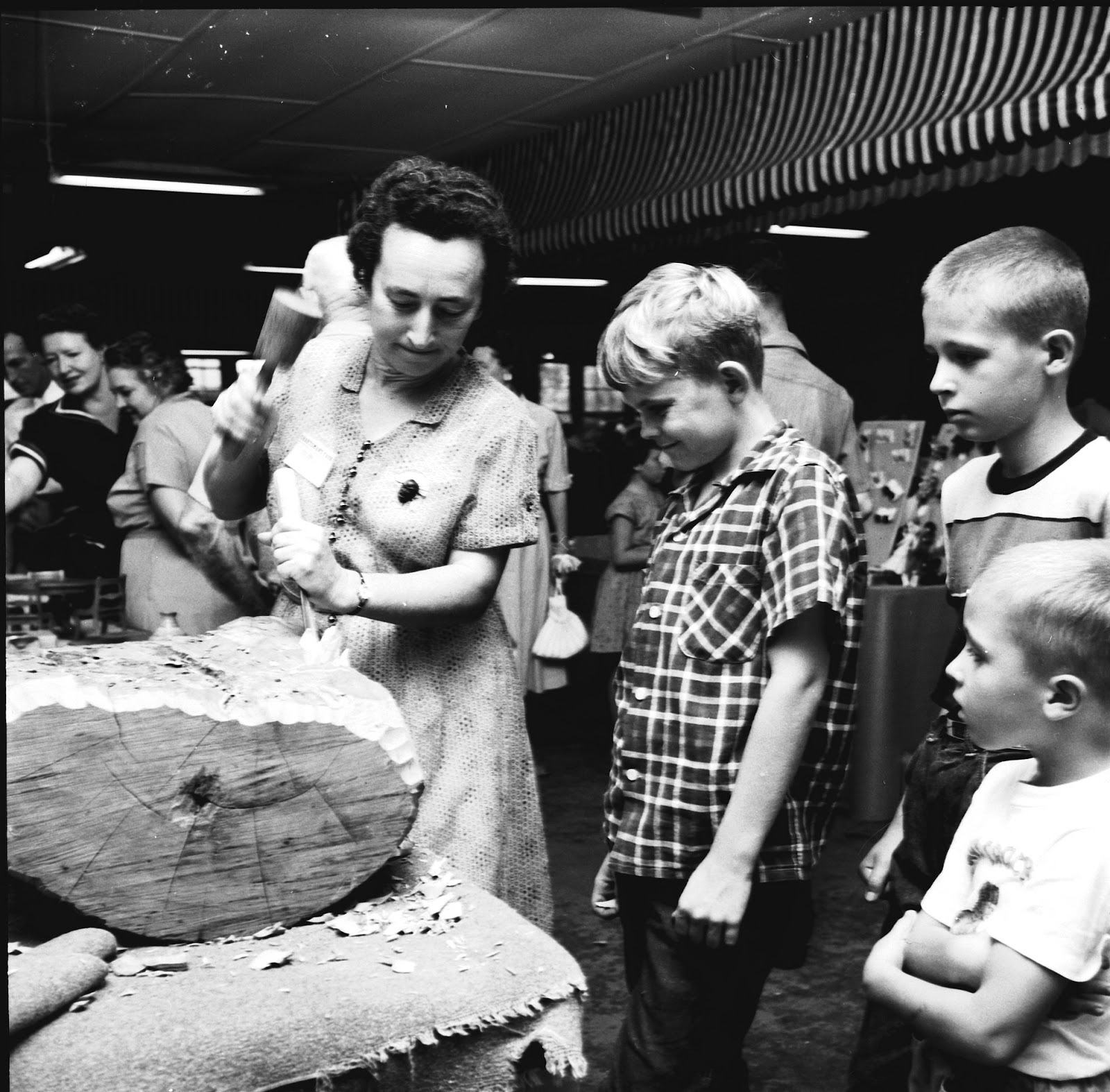 Chiltoskey joined the Guild in 1948 and participated in fair demsontrations, exhibitions and booth sales from the 1950s through the 1980s.  He was the first active tribal member of the Guild.  He served on the Board of Trustees and the Standards Committee and demonstrated at the Folk Art Center.  He received Life Membership to the Guild in 1972 and continued active participation until his death in 2000.  Chiltoskey was one of the founders of Qualla Arts and Crafts Mutual, Inc., the tribal craft cooperative and gallery. Cherokee heritage was important to G.B. and his wife, Mary Ulmer Chiltoskey.  Mary wrote several books on Cherokee culture, language, and storytelling as well as native plants.  She taught mathematics and social studies and was the librarian at the Cherokee School from 1942 to 1967.  Mary also taught the Cherokee language and the alphabet.  Goingback and Mary were fluent in Cherokee.  Goingback was also a tribal blow gun champion. Goingback used native woods such as cherry, buckeye, walnut, holly and apple in his carving.  He carved significant tribal images such as the Eagle Dancer and the tribal seal.  He also created numerous animal figures including geese, howling wolves, cougars, bears, weasels, dog, giraffes, birds and buffalo.  He received commissions to create many wooden emblem plaques for government agencies, a scale model of the battleship North Carolina, a bust of Zebulon Vance, and Lady Justice for Campbell University.  Chiltoskey also continued to create jewelry, particularly silver rings with stones and belt buckles.  He made Mary’s wedding ring and a special brooch for her. Chiltoskey received the North Carolina Art Society Purchase Prize in 1953 for his carving, the Great Horned Owl.  In 1974 he accepted the Western North Carolina Historical Association Achievement Award.  He acquired the 1982 award for service to the North American Indian Women’s Association.  He received an Honorary Live Membership in the International Wood Collector’s Society.