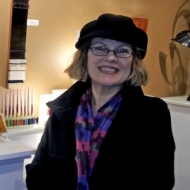 “K4” symbolizes the Four family members over Two generations of the Kelemen family. That’s the easy bit. The “Glassart” part is a much longer story that sprouted roots in Caracas, Venezuela and thrives today with kilns in Asheville, NC.

Like all good stories that have a hero, ours is named Frank Kelemen, who as a trained architect had become famous for his magnificent stained glass designs in Venezuela. Only slightly less famous were Frank’s twin daughters who “somehow” -- after graduating with a degree in architecture -- took up the hobby of fused-glass. Lastly and not wanting to be left out, Frank’s wife, Josefina, joined the crew. The foursome resurrected an old baby glass kiln and under Frank’s tutelage, progressed from basic glass cutting to creative designs to experimental fused-glass techniques that blossomed into endless prospects.

In 1983, Kelemen Kuatro Glassart opened a studio in Caracas, Venezuela. Five years later, with business expanding world-wide, daughter Beatriz set up a studio in Boston leaving her twin sister behind. You might think Alicia would soon leave for Massachusetts, too, but Father knew best and encouraged her to complete her theoretical and practical education first. So off she went to Oregon's famed Camp Colton to take part in the new program in Glass-Fusing. After mastering that, she wandered further north to join Pilchuck Glass School of Arts in Washington. Here, she met Professor Ludgwig Schaffrath who invited her to study at the Staatliche Akademie der Bildenden Künste in Stuttgart, Germany. Quite an honor.

Is there an end to this Wanderlust, you are thinking? Not yet. Alicia did finally make it to Boston but in 2005, the twins followed the Call of the Art World and moved to Asheville, North Carolina. There, Alicia continues her design work with her studio facing panoramic vistas of the mountains.

Alicia’s classical training in architecture integrates her art with the decorative design of the living space. The years of drafting emerge in art forms of geometrical shapes, texture of materials and pure lines. She then sets these into decorative art for walls and murals, sculpture and home décor pieces as well as a complete line of Judaic Art. For commissioned work, the trick lies in knowing how to handle small and large scale formats.

It’s also a compliment to her hard-earned success that many well-known individuals own her work including international dignitaries such as The King of Spain and The King of Jordan plus top performers in the entertainment industry, to name a few: Arnold Schwarzenegger, Whoopi Golberg and Gerald Cafesjian.

The K4 line was exhibited at the Art Salons of the Arts of Fire in Venezuela winning many awards and accolades and in 1995 Alicia won the National Award in Glass with her fused glass water lilies series.

Crafts by Alicia Kelemen view all