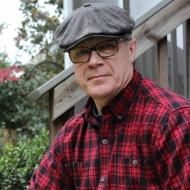 At the foot of the Blue Ridge Mountains in South Carolina, Bill Apelian handcrafts heirlooms in wood. Using traditional tools—handsaws, lathes, gouges, and artists’ oil colors—and his imagination, he creates Santas and ornaments in an Old World style.

Each carving is one-of-a-kind: named, signed, and dated by the artist. Bill prefers the American linden (basswood) for its straight grain, just as the Renaissance master carvers did.

After he shapes a block of wood, Bill carves the Santa with hand tools, giving each wood sculpture a personality of its own. Then he mixes and thins artist's oil colors to make stains that color the wood while allowing the grain to show. He lets his imagination, his tools, and the wood work together to produce the delightful expressions, soft coloring and craftsmanship that are the hallmarks of these highly collectible works of art.

Bill's great uncle was a wood carver, and the skill and desire also live in Bill. Although he admired his great uncle's work from his boyhood days, he began his own artistry only after his daughter asked him to make her a cat.

Today, Bill's Old World Santas have become collectors' favorites for their originality, warmth, and sense of movement. Own one of these Santas and he, like the one of legend, will charm many generations to come.