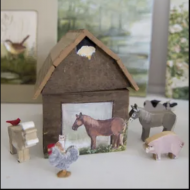 Barbara C. & Hugh A. Webb
Wood
This user account status is Approved
About About
Gallery Gallery

Barbara Webb found her profession when she taught herself to paint.

Webb is a painter and craftsperson. She began creating with brushes, paints and bits of driftwood decades ago, turning the wood into buttons or pins painted with tiny flowers or birds. But she's expanded her craft, transforming gourds from her garden into folk art chickens, creating realistic flowers of clay and canvas, and, most recently, sewing delicate bits of silk into colorful floral corsages.

This week Webb and her husband, wood craftsman Hugh Webb, will display and sell their art - from her miniature paintings to those gourd chickens to his small, simple nativities - at the Foothills Craft Guild’s 50th show. Some 140 craftspeople will exhibit at the Nov. 18-20 show at Chilhowee Park’s Jacob Building, 3301 E. Magnolia Ave.

Barbara Webb is a founding member of the guild, established in 1965 and the oldest craft guild in Tennessee. The Knoxvillian is the only founding member who has exhibited at every guild show. “I’m just as excited about the 50th show as I was for the first one," she said.

Hugh joined the guild a few years after his wife; he’s likely been a member for 45 years. “They made me a member because I kept showing up at all the shows,” he joked.

The Webbs, who met as University of Tennessee students, are an artistic team. In addition to craft shows, they create art for several galleries. Items range from her acrylic paintings on wood, often showing realistic East Tennessee rural landscapes, to his three-dimensional nativities. New this year is a miniature wooden barn built by Hugh and painted by Barbara. The barn's roof opens to reveal a farmyard of handmade and handpainted miniature animals.

He carves birds like cardinals and wrens from basewood; she paints them. He cuts the wood for her canvases and pins, builds frames for paintings, makes the tiny easels for her popular 1.5-by-2.5-inch landscapes. Some of his small wrens he leaves natural, without paint. And his nativities aren't painted. His infant Jesus made with a hemlock cone body sleeps in half a walnut shell manager. Mary and Joseph are small bits of turned wood dressed in cornshuck robes.

Hugh builds small boxes shaped like houses, barns or churches that Barbara paints. The tops of the miniatures lift off. A tiny mouse sits inside the church box. "I like to make small stuff and she likes to paint small stuff. So that works out good for us," Hugh said.

Some art supplies are used wood, old window frames, driftwood, acorn tops, walnut shells and hemlock cones they salvage or collect. A row of chickadees Barbara paints on weathered board is among her popular sellers. When she needed flowers like Lady's Slippers as models for her paintings, she created pretend blooms of clay, canvas, silk and string. The flowers were so realistic she began selling them.

The Webbs enjoy working every day. Hugh often creates in his "lower level" basement workshop. Barbara paints on a counter in a first-floor studio. "I paint whatever he brings up from the basement," she said. "She's always working on something," he said.