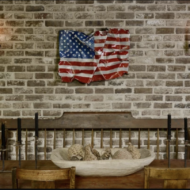 My name is Ben Caldwell, and I am an artist, specializing in the creation of functional and timeless metalwork. All of my work is custom hammered, raised and chased by hand, resulting in quality, one-of-a-kind creations that will far outlast their creator. I like to think of my metalwork as the marriage of beauty and functionality, something you just don’t see much of these days.

I am a classically trained painter and sculptor, and received my Bachelor of Fine Arts from Tufts University in 1991. I then went on to receive further training at The Studio School of New York, Harvard University and The Boston Museum of Fine Arts. Before finding my passion for metalwork, I made everything from custom guitars to West African drums; but, as an artist, I wasn’t making much of a living until my father was approached by nationally known metal worker, Terry Talley.

Terry was a metal artist of the old school. He was dying of lymphoma when he approached my father and asked if I would be interested in training under him. He knew that I was an artist, and he wanted to pass the almost entirely abandoned craft on to the next generation. Honored, I quit my job in 1999 to train with Terry full-time.

Thanks to my classical background and my incredible teacher, I caught on rather quickly, and even began to invent, design and build a lot of my own tools. With the help of my phenomenal teacher, my supportive parents and my amazing wife (Lael), I started Ben & Lael Inc., and began creating and selling custom, one-of-a-kind copper, silver and enamel art. Since then, I have received the Tennessee Artists’ Guild’s “Emerging Artist of the Year” award, and I’ve also had work commissioned as a wedding gift for Amy Grant and Vince Gill.