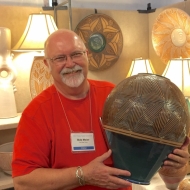 Bob Meier is owner and operator of Doe Ridge Pottery in Boone, began his highly successful career by mistake. A mystical experience dictated the future of his Life’s work.
As a student at Appalachian State University he reluctantly took a pottery class to fill a void in his schedule. The first time he saw clay being thrown, however, he experienced a revelation. In his mind’s eye the clay took on a Life of its own and it was difficult to distinguish who or what was managing the process -- potter or pot! As if by “sleight of hand” the clay transformed from a lump of mud to a thing of beauty and function. He later described the experience as “an epiphany -- the secular equivalent of being saved.” Bob was hooked.
That was in 1974. Since that time Bob has treated his profession with the awe and respect that originally drew him. For while people are drawn to Bob’s work because of its beauty and simplicity, they learn – with use – of its flawless functionality. When one delves into the thought patterns that govern his designs, they find a dogged determination to enhance his collector’s lifestyle and well-being! Does form perfectly follow function? He asks this question at every turn of the wheel.
Bob thoroughly enjoys teaching his craft as well. Known as an organized, thoughtful and generous teacher, he has become the favored pottery instructor in the high country. In addition to the classes he offers in his studio, he’s also a sought after instructor in higher education. He’s taught drafting, design, technical illustration, graphic arts, screen-printing, career exploration and art for elementary teachers.
Bob has received numerous accolades for his pottery. He is a juried member of the Southern Highlands Craft Guild: his work has subsequently been on exhibit at the Folk Art Center in Asheville and the Moses Cone Manor in Blowing Rock. He is also a member of the NC Potter’s Association and is represented by several fine galleries: North Carolina Crafts Gallery in Carrboro, Lynn Morrow Pottery in Pittsboro, Appalachian Craft Gallery in Ashville and Seagrove Pottery Gallery in Raleigh and Seagrove. He also maintains numerous wholesale accounts and is sought after for custom work from individuals and designers.
His customers, representatives and students have perfect faith in his professional creed. “If it’ll fit in my kiln I can make it.” And the end product is always meticulously beautiful and flawlessly functional.
Visit his studio and gallery at 585 West King Street in Boone, North Carolina and experience the magic.