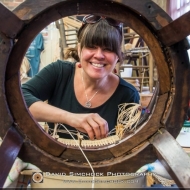 Brandy is a 4th generation chair caner on a mission to promote a "lost art." Silver River Center for Chair Caning is an official education center of the Craft Guild and the nation's only chair caning school and museum. Our mission: cultivate and inspire a reverence for a world wide chair caning legacy.

Brandy is continuing not only a family tradition, but also a world-wide chair caning legacy. She is truly an ambassador of the craft, researching and traveling the US and Europe to cultivate a reverence for this ancient and global craft.

Brandy learned 4 basic styles of weaving from her Aunt Linda, and went on to start a part-time side job restoring caned chairs. After working for furniture refinishers in Asheville and Charleston, she got an Artist In Residence gig at the Grove Arcade Arts and Heritage Gallery. It was seeing the reaction of the visitors that made her realize how special the craft was and it was their questions that began her quest for historical and contemporary knowledge.

Brandy continued (and continues) to demonstrate regularly with historic homes, craft centers, and gives lectures to furniture societies. She and her husband, Dave Klingler opened up a small shop in the River Arts District in 2010. She joined the Southern Highland Craft Guild as a heritage member in 2011. Together they wove over 2000 chairs and began to consider teaching the craft to others.

In 2013, Brandy & Dave attended The SeatWeavers' Guild Annual Gathering in Massachusetts. On the way, the stopped off for the night in Pennsylvania. To their surprise a chair exhibit was right around the corner from where they had lunch. It was The Art of Seating, 200 years of American Design. From the moment they saw the exhibit, they knew a chair caning museum was in their future.

In 2015, Go Chair Repair (the restoration business) was rebranded to Silver River Center for Chair Caning and they moved into a 2500 sq ft industrial chic sunlit studio in CURVE Studios & Garden. They have since taught over 200 sessions and have been featured in a number of publications.

In 2016, they hosted The SeatWeavers' Guild Annual Gathering at the Folk Art Center and brought almost 100 chair caners from across the country to Asheville. Local Southern Highland Craft Guild members who use woven chair seats had their work on display. They also hosted a public event where visitors were able to try out 5 styles of weaving and fall down the rabbit hole of chair nerd culture.

In 2017 Silver River Center for Chair Caning became an official education center of the Southern Highland Craft Guild. Brandy also traveled to Scotland to study the Orkney Chair. This trip was on the heels of a 2015 trip to England where she was the guest of chair caning scholar Brian Crossley of the Basketmakers Association who was lecturing at their annual meeting. Yes, it is possible to have a chair-centric vacation.

Most recently Brandy is honored to be featured in American Craft Magazine. She is available for lectures, demonstrations, and on- and off-site classes in Asheville and around the world.

Yes, this member is available for custom work.
×
Scroll To Top