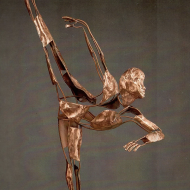 His first foray into art was in 1976 when the head of Averno College’s Art Department accepted him as a private student (He was not admitted to the college as a regular student, in part because Averno was an all-girls college; a fact that did not dissuade him from applying.) He continued pursuing his interest in fine art while living in Paris, London and Boston.

In London his artistic endeavors broadened to include performing art. He studied jazz dance for a year at London’s Pineapple Dance Studio. After returning to the States, the performing arts and fine arts merged into a series of drawings and painting focusing on dance. He studied sculpture at the University of Wisconsin and later at New Orleans Academy of Fine Art.

For 20 years his art was sporadically produce as he pursued a career in environmental law. Moving to western North Carolina in 2003, sculpture has reemerged, with an expanded focus on the athletes and musicians.