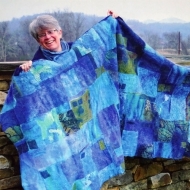 I am a weaver of cloth, and maker of garments. My fabrics are a blend of cotton and rayon yarns in a variety of textures and sizes, beginning with the selection of a dozen different shades of a single color.

I grew up in southeastern Minnesota in the Mississippi River valley, across the street from Lake Winona, looking at river bluffs covered in a mixed hardwood and conifer forest. Traveling in 1992, trying to decide the next place to be, I discovered that the southern Appalachian mountains of Western North Carolina partnered with my visual memories, and that I had found home.

I had been a full-time craftsman since 1978. In college at Winona State, and later, St. Cloud State University, I fell in love with clay and fiber, and worked like a demon in both. I realized that I had a specific direction in clay as a thrower of functional pots, and so I finished a BFA in Ceramics in ‘77, and settled into making pots in a group studio outside of Minneapolis. By 1980, I'd relocated to Iowa, to make pots as the “anonymous” craftsman, in the EARTHWORKS studio, of Alexander. We made many pots, did many craft fairs, and during what became 12 years in Iowa, my weaving interests prompted me to collect yarns, threads, fabrics and looms, and to weave a few rag rugs.

When it was time to leave Iowa, I decided to pursue weaving full time. I looked for a school and a place, and chose the Professional Crafts Program at Haywood Community College in Western North Carolina, which I began in the fall of 1992. I decided I wanted to sew garments out of handwoven cloth and began setting myself up to do so professionally. I realized I missed weaving rag rugs, so I figured out how to make a woven rag fabric soft and thin enough to make into garments. Cutting narrow strips of rags less than 1/2" in width, and on the bias, makes for soft lovely fabric with good body. My rag fabric was central to the development and sustainability of my art-to-wear business, and is still a part of my regular line of garments.

In the fall of 1998, I met fellow fiber artist Neal Howard. We were participating in a group show, and determined that our work looked great together. Since she made scarves and wraps, and did lots of dye work, and I made garments that were woven, we decided to try sharing a booth and presenting a diverse line of wearable art at craft fairs. We did so, for the first time, the next year at the Craft Fair of the Southern Highlands. We've done nearly all of our shows together ever since.

Neal started gifting me with the woven ends of her scarf warps in 2006. She figured I might be able to do something with her beautiful remnants. Over the next handful of years I started using her woven and shibori dyed silk fabrics in select areas of my garments. Once the collaboration began in earnest, both Neal and I found pleasure in the new possibilities, and the range of work that we exhibit jointly expanded in scope and creativity.

I am still a maker of handwoven fabrics. My garments are now carrying areas of NUNO FELT that I create. My line of handwoven wearables often incorporate areas of handmade fabrics and surface design from fellow fiber artists. These collaborations, known as LIZ SPEAR & FRIENDS, invigorate my creativity and emphasize the one-of-a-kind nature of my clothing. I exhibit these garments throughout the year, mostly in North Carolina.

Teaching fills up part of every year. I mentor creative process through demonstrations and workshops. Currently, nuno felting and sewing handmade and/or handwoven cloth are the focus of my classes.

Yes, this member is available for custom work.
Yes, contact this maker for your gift registry.

Crafts by Liz Spear view all