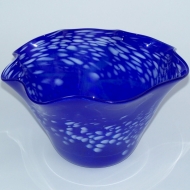 I use several different techniques in my work, but for the most part, I employ the use of powdered colored glasses & frits,(small chunks of colored glass) and then layer that with clear glass know as encasing. Several layers may be used in order to obtain the effects I desire. I often use a technique know as trailing-where you gather glass and string it along the surface to achieve a negative or positive line image in the glass.

Mark Sanders holds a B.S. in Art from George Peabody College for teachers in Nashville, Tennessee. He was studying clay there until his pottery teacher (who also taught the glass program ) said to him, 'You know, you could probably make a pretty good living doing pots, but you are just crazy enough to enjoy glass. Come give it a try.' He did, and proved that the professor, (Michael Taylor ) was correct. He loved glass instantly, hooked by one bubble. That was almost thirty years ago and he still loves it. He graduated from Peabody in 1979.
In 1982, he was able to open his own studio on a part time basis. He studied at Penland School for Crafts in North Carolina. He was fortunate enough to be able to study under Fritz Dreisbach, professor and premier second generation private studio glass blower, who had learned with Harvey Littleton, one of the fathers of private glass studios. Shortly thereafter, he took the plunge and took his own studio to full-time. While attending numerous work shops and conferences, he has shown his work in one man shows and exhibits, as well as doing craft shows on a full-time basis. He is a member of Foothills Craft Guild, Southern Highland Craft Guild, Louisiana Crafts Guild, and is a fellow in the Craftsmen's Guild of Mississippi. He has won awards at shows such as Spring Fest, Fairhope , Arts Alive, Kentuck, and Powers Crossroads to name a few.

To Sanders, the combination and interaction of light, color ,line and form in a piece are the most interesting factors. In approaching his work, he admits, 'No subject is unworthy of consideration. The majority of my work is functional; therefore people must interact with the piece....touch it, feel it.' Many artists seem to believe that their work should be strictly for art's sake and that the making of functional items is beneath them. Sanders believes that the real challenge is in making a utilitarian item into a thing of beauty, an object that inspires emotion. He wants his work to be used, to be touched and admired, enjoyed and appreciated, not to be simply placed upon a shelf to gather dust. 'I have fun with glass and try to convey that joy to the viewer. I intend for the viewer to join in that fun.' He continues, 'I believe the spontaneity of the medium of hot glass fits my personality. I like to be able to do something and see immediate results. The glass also allows me to push myself physically and intellectually and is intrinsically interesting because of its lightness to the eye, yet its heaviness to the touch. The mystique of glass is due to this juxtaposition.'