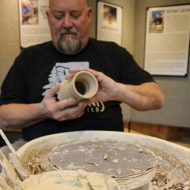 What had begun as a hobby soon became an obsession. The flexibility of how the clay could be manipulated into various shapes and forms and then embellished with such a variety of designs, colors and impressions made it an inexhaustible intrigue for him.

He earned his Masters' degree in studio art at Western Carolina University in 1996. In addition, he has studied the art form at the prestigious Kansas City Art Institute and at Alfred University in New York State with such great American ceramists as Ken Furguson, Val Cushing and Victor Babu.

In addition to his own work, which has been on display at the Orlando Biennial, Key West Art Festival, the Winter Park Autumn Art Show and Festival of the Masters at Walt Disney World, his ceramic students have won awards, honors and scholarships bringing him recognition as one of the best art teachers in the nation. Each year he hosts workshops with some of the best ceramists in the nation to benefit his students learning. Some of those included having been Don Davis, Chris Staley, Bobby Silverman, Jeff Oestreich, Stephen Hill, William Hunt, George Timmock, Paul Soldner, Josh DeWeese and Suze Lindsey.

The excellence Mike puts into his teaching, he also puts into his works of art. Examples can be found in the collections of, or seen at the Alabama State Capitol Building, State of Florida Governor's Mansion, private collections of George Steinbrenner (owner of New York Yankees), General Hal Moore (retired US Army general and author of "We Were Soldiers Once and Young") Terry Bradshaw (Hall of Fame Quarterback), Chris Berman (ESPN sports anchor) and Richard DeVoss (owner of Orlando Magic) to name a few.

The work has greatly varied throughout the years. The most current work is a mid-fired white stoneware body which is both functional and sculptural in form. The pieces are then glazed with a predominately ash glaze that leaves a nice flowing design in the fished work. Glazing inside and out allows for vases to hold fresh flowers as well as dried arrangements. Michael uses only lead-free glazes that are food safe as well as microwave and dishwasher safe, but do avoid extremes, such as going from a refrigerator into a hot oven. Not made for stove top use.

Where room is available, the artist signs his pieces so you are assured of authenticity. Smaller pieces make nice little gifts that can be used for soap, candy, sauce or candles, and because no molds are used, and they are each individually made, they are unique and one of a kind.

Enjoy your work of art by Mike Lalone!

Crafts by Michael Lalone view all