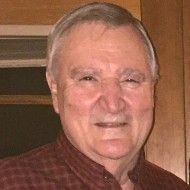 “Glass is a mysterious medium. I enjoy the depth of color combinations, forms and textures you can get by firing glass in a kiln at various temperatures. I am fascinated by the mysteries of how many ways that glass, a seemingly hard material, can be manipulated. My design work is done by sandblasting the various art or patterns into the glass, then firing again to fire polish the glass.”

Born and raised in Shawnee, Kansas, Mike knew he would be an artist even as a child. After moving to Orlando in 1960, he studied graphic arts and in 1965 he was employed by the Orlando Sentinel-Star (Orlando's primary newspaper), as a commercial artist. A few years later, he was promoted to the Advertising Art Director at the Orlando Sentinel. After he retired, he began working with glass since he and his wife, Kathy, have always had a love affair with glass art.