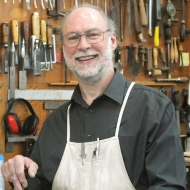 From the beginning of my involvement with using an interesting piece of wood to make something lovely and fine, everything has fallen into place to keep me firmly entrenched in woodworking. I feel working with wood, in all its forms, is a way of preserving and showcasing its versatility and extreme beauty. --Michael McDunn

Michael McDunn started woodcarving in a serious way in 1974. He purchased a wood lathe and began woodturning in 1975. Soon after, he was asked to build displays, framing, furniture and accessories for the Greenville County Museum of Art. The Museum hired him in 1976 and there he continued to develop his skill and love for art and finely designed furniture.
Later, Michael began making custom pieces for individuals and businesses and left the Museum in 1981 to concentrate on his new business full time. His first love was contemporary furniture but he realized this was not in great demand at that time. Because he has always worked closely with clients to draft and finalize their desired design, Michael quickly added 18th century furniture to his repertoire. Innovative and unique use of wood became Michael’s specialty as clients became aware of his ability to fill a design need. All furniture is crafted on location at the studio in Greenville and his work resides in many homes and businesses in the eastern U.S. and Europe.
Michael’s work has been featured in magazines including Fine Woodworking, Woodcraft Magazine, Fine Woodworking Design Books 2 and 3, Custom Woodworking Business, Woodshop News, At Home, Greenville Business and Living, and others. He also won awards for his unique furniture designs and craftsmanship, including Niche Award Finalist 2014 and 2015, American Masters, 17th Master Woodworker Show “Best of Show”, and was a co-recipient of the “Silver” Addy Award, from the Advertising Federation of Greenville.