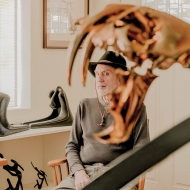 Richard Flottemesch
Wood•http://richardflottemesch.com.
This user account status is Approved
About About
Gallery Gallery

Story from Asheville Made
Growing up around Baltimore, Richard Flottemesch had a tough childhood. “I’d walk the ditches on the way to school and collect soda bottles,” says the sculptor, based now in Candler. “They brought two cents apiece, and I’d use the money to buy candles that were ten cents apiece, so that I could read at night. Most of the time, I was by myself in an unheated house, no electricity, no bathroom.

“I guess I’ve always been an artist, but it got drummed out of me by my family and others.”

Every so often, though, came glimpses of his rebellious talent. “When I was in the fifth grade, the teacher gave each of us a bar of soap and told us to carve the Parthenon. I said, ‘Why do that?’ Instead, I cut the soap in half and carved a couple of heads.”

Jeanne Maria, Convoluted Man, Grace
In junior high, he began drawing pictures of horses. “I remember doing one of Black Beauty. They posted that drawing in the hallway,” he says, still proud after all these years. He also tried his hand at sculpting and made a wolf’s head.

Flottemesch made it partway through the twelfth grade before deciding he couldn’t handle the pressure anymore, mostly because of the situation at home. “I took all my high-school books to the office and put them on the counter and told them I was quitting. They told me I couldn’t — and I said ‘Watch me,’ and walked out. … Three weeks after that, I joined the Navy.”

Later, he attended college, but, following the pattern he’d established in high school, he stopped short of graduating. Flottemesch was always more interested in hands-on education than in diplomas. His CV today includes an apprenticeship at the Johnson Atelier Technical Institute of Sculpture in New Jersey and a stint with master stone carver Pasquale Martini in Tuscany.

When he was 28, he got some wood and began carving, and now, at 77, the widely exhibited artist stands in his living room, filled with sculptures, vessels, and other art, and says, “Everything you see here, I made” — as though he can’t quite believe it himself.

For years, he made abstract figures. More recently, he began creating vessels, some of them turned on a lathe, others carved with hand tools. The materials, in addition to wood, vary and include autoclave concrete, onyx, alabaster, and marble.

“Almost none of my sculptures are planned,” says Flottesmesch. “Instead, I let the material tell me what it wants to be.” Except the material stays mum when it comes to the finish line.

“I’m never done,” he says. “There just comes a point when I have to stop.” But continually proving oneself — that takes time.