Our brick & mortar stores are opening the first week of June and we are abiding by the orders of Buncombe county that require face masks be worn inside retail locations. We will have face masks available upon request. Our online shop is offering free shipping and curbside pick-up at our Tunnel Road location by appointment only. Group events scheduled through June have been cancelled. Sign up for our newsletter or check our Facebook page for the latest information. 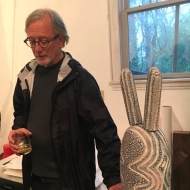 Robert Milnes’ artworks have been included in over 175 exhibitions nationally including 28 one/two person shows. The works are represented in private and public collections including the Renwick Gallery (Smithsonian Institute), Arizona State University, the Seattle Arts Commission, the San Jose Museum of Art, the Erie Museum, and numerous private collections. His sculptures and sculptural containers are represented by the Bender Gallery in Asheville. Arbitrary Forms vessels are carried by Grovewood Gallery in Asheville, In Tandem Gallery in Bakersville, and Taupe Gallery in Wilkesboro.

Milnes holds a PhD in Higher Education Administration from the University of Pittsburgh (1987), a MFA in Ceramics from the University of Washington (1974), and a BA in Philosophy and Fine Arts from Claremont McKenna College (1970). He a Life Fellow of the National Association of Schools of Art and Design and Emeritus Dean of the College of Visuals Arts and Design at the University of North Texas, where he served from January 2006 through August 2014. He worked previously as Professor of Art and Director of the School of Art and Design at San Jose State University, a position he held for fifteen and a half years. A sculptor and ceramist, prior to his arrival in San Jose, he was Director of the School of Art at Louisiana State University (1987-1990) and Chair of the Art Department and Professor of Ceramics at Edinboro University of Pennsylvania (1974-87). He taught ceramics at the Penland School of Crafts in 1972 and 1979.

Milnes served a three-year term as President of the National Association of Schools of Art and Design from 2008-2011, as Vice President of NASAD from 2002-5, as a member of the Executive Committee of the Board of Directors of NASAD from 2000-05, and from 1991-1997 as a member of the Accreditation Commission. He is past-president of the National Council of Art Administrators. Also past president of the Arts Council/Silicon Valley, he served on the Board of Trustees and Executive Board of the Montalvo Center for the Arts (1999-2005) in Saratoga and on the Aesthetics Advisory Committee for the Public Art Program of the San Jose Arts Commission (2000-05). While in Texas, he was selected to be on the KERA-FM Public Broadcasting Community Advisory Board, as Vice Chair in 2009-2011 and Chair 2011-13. He served for five years on the Board of Directors of the Business Council for the Arts, a North Texas organization. In Asheville, he now serves as co-chair of the Community Forum for Blue Ridge Public Radio Community Forum and on the meeting planning committee for the SHCG.