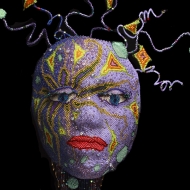 My edges are uneven, I am not perfect. I embrace the charm of imperfection. In many cultures throughout the world it is considered a sign of humility to leave one element of a work imprecise. Absolute perfection is considered the realm of the creator. In weaving, a straight, even edge is often the focus. I enjoy playing with the accidental.

Using off-loom bead weaving techniques Wendy Seaward composes intricate sculptural works out of glass seed beads and natural materials such as semiprecious stones, pearls, fossils, and found objects. While living in Africa as a Peace Corps Volunteer, she was inspired by the dynamic beadwork of the Ndbele, Swazi, Zulu, Xhosa and Basotho cultures. With a degree in horticulture and a passionate interest in sustainable agriculture and the environment, natural forms are lovingly imbued in her work, evident especially in her freeform pieces, which may feature spirals, curls, droplets, openings and other forms found in nature. Wendy has received national acclaim for her highly elaborate beaded masks. They are exotic in appearance, therapeutic gestures of self reflection.

Well known in the Southeast, Wendy has won numerous awards in fine craft shows as well as art exhibits and galleries. Her work is collected by Nashville stylist to the stars, Cheryl Johnson and has appeared on the red carpet of the Country Music Awards, the Ellen Degeneres Show, and during television performances on the Academy of Country Music Awards.. She is in the collections of Tene Jewell, wife of country singer Buddy Jewell, Stevie Nicks, Hilary Scott of Lady Antebellum, and Knoxville Mayor Madeline Rogero.