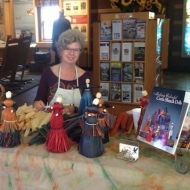 I fell in love with corn shuck dolls in 1975, when I learned how to make one in an Appalachian Studies class during my senior year of High School in Oak Ridge, TN. I have been making the dolls ever since that day. I am a full-time craft artist, and have been a member of the Southern Highland Craft Guild since 1989.

Call it fate, call it destiny, call it grace; I call it my saving grace. Because as a teenager, I was restless, bored, trapped in high school with no real plans for the future until I enrolled in an alternative education school for my senior year and chose Appalachian Studies as my history requirement. It was here that I was introduced to the traditional art of corn shuck dolls, and it was like "picking up an electric wire" for me (as my friend Hugh Bailey, the potter and watercolorist put it when he discovered his muse). The connection was powerful for me, and not just because I had found an art form that I was enchanted with, but because it linked me to my deep East Tennessee roots, and allowed me to accept and appreciate the Appalachian American in myself.

I have been creating figures from corn shucks since 1975, and challenge anyone who claims that you can't learn anything of value in high school! I started selling my work at the Community Craft Co-Op in Norris, TN (now called the Appalachian Arts Craft Center), and attended my first crafts fair in Rugby, TN in 1976. Soon after, in the winter of 1977, I attended the Arrowmont School of Arts and Crafts in Gatlinburg where I learned more about the art of corn shuck dolls from Lila Marshall and her daughters, Phyllis Combs and Wana Henry. From this auspicious turning point, I continued to experiment with color and movement and made as many dolls as I could in my spare time. My craft continued to evolve as I worked a full-time job and attended school. After graduating in 1988 with a BS in Communications from the University of Tennessee, I was accepted into the Southern Highland Craft Guild and Tennessee Craft and participated in two of my first "big" shows. I continued to work full-time as a Community Relations Representative at Lockheed Martin, but it soon became apparent to me that I wanted to make corn shuck dolls ALL the time, and make my living from what I loved to do! I decided to leave my career in 1997 to work as a full-time craft artist, and I have never looked back. And, after years of searching for a source of detailed, comprehensive instructional material on the craft of corn shuck dolls to no avail, I decided to write my own book on the craft. With the help of Schiffer Publishing, I authored "Making Colorful Corn Shuck Dolls," which was published in December, 2011. It is the first comprehensive book on making my particular style of corn shuck dolls with step-by-step instructions and over 250 color photographs illustrating the entire process, from dyeing the shucks to embellishing the doll. The book is especially useful to students who take my workshops and classes as reference material to help them make more dolls on their own. Every one of my students experiences some degree of magic when they see a corn shuck doll emerge from their own hands. And this is another reason I love this craft so much!

I enjoy working as a full-time craft artist, making my living almost entirely from wholesale and retail sales and teaching my craft. I also formulate and produce handmade herbal soaps, creams and other natural products for the body and soul, and teach others this craft as well.

I am constantly experiencing the joy of keeping this Appalachian art of corn shuck dolls alive.