1948: The First Craft Fair of the Southern Highlands 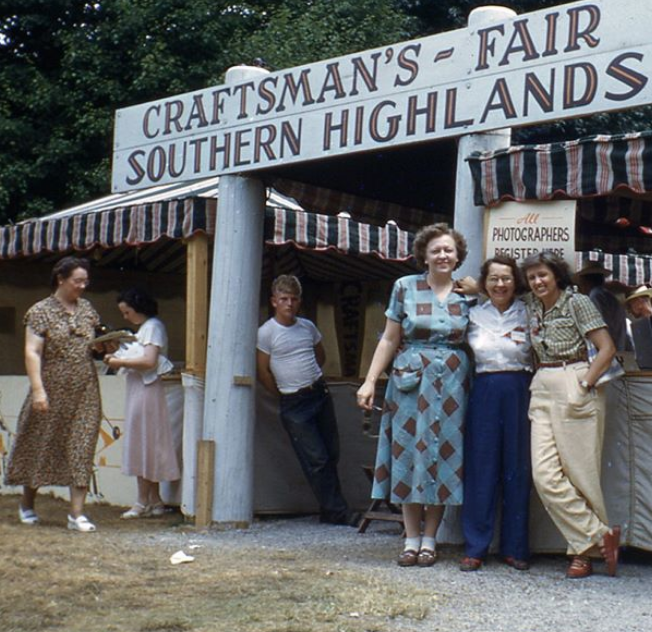 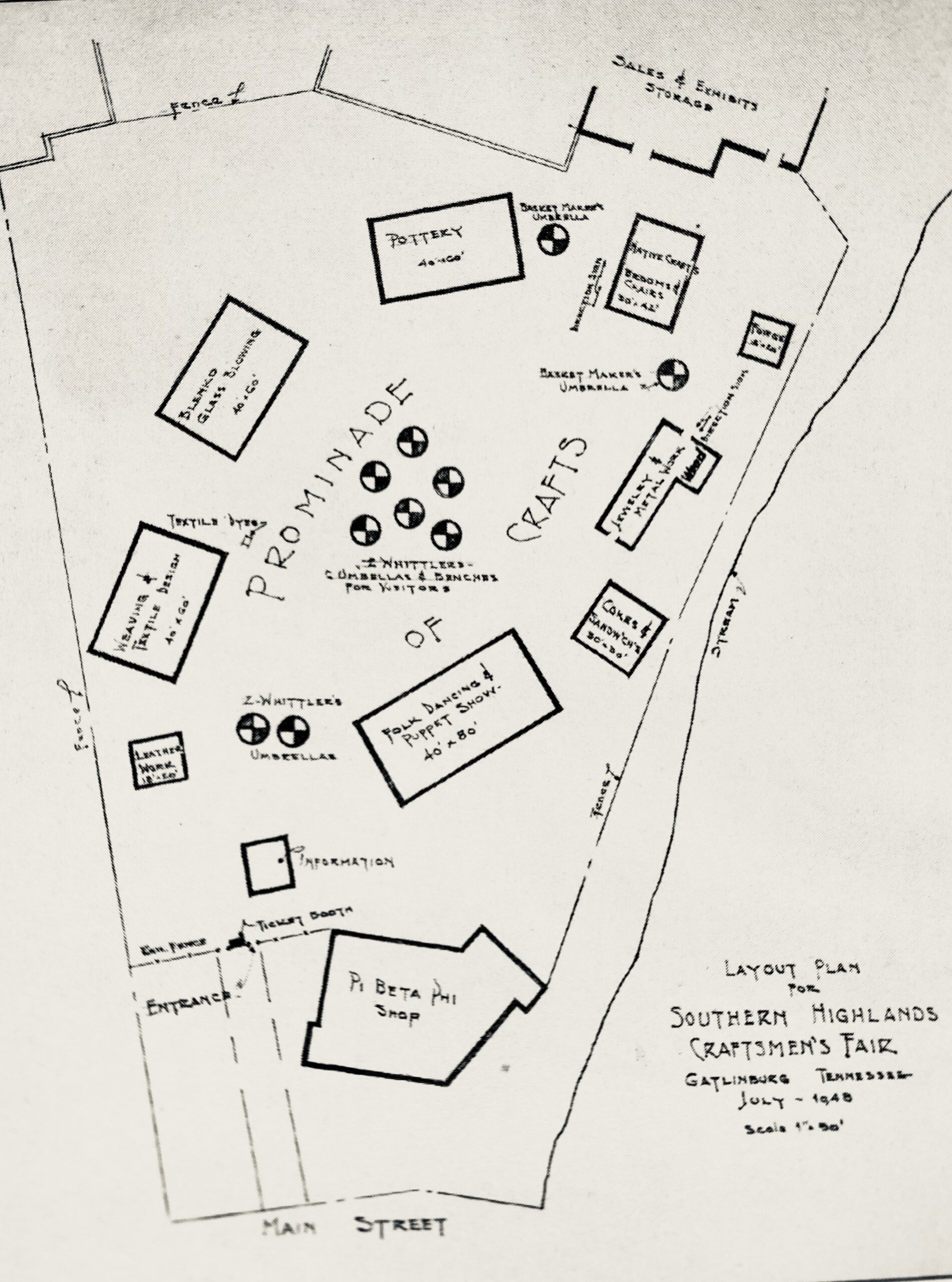 The World War Il years were a difficult time in the mountains, but as things returned to normal, guild leaders decided to launch a Craftsman’s Fair of the Southern Highlands. Guild membership had increased, and artisans were returning home. The fair was set up in Gatlinburg, Tennessee, on grounds belonging to the Pi Beta Phi Settlement School campus. The fair took place over the course of a week in July 1948, and craftspeople performed demonstrations from 9:00 a.m. until 10:00 p.m., rain or shine. Tents were arranged to house various specialties, including weaving, glass, pottery, basketry, woodwork, natural materials, metalwork, and folk dancing. Several craftspeople were situated under a scattering of beach umbrellas.

This is a rare photograph of Clementine Douglas (left), manager of the Spinning Wheel, and Marian Heard. Heard was a member of the faculty at East Tennessee University. She was able to take a sabbatical in the 1940s to help the guild collect data for a Craft Education Survey of the Appalachian States. Working with Douglas and other men and women, Heard interviewed as many isolated craftspeople as possible over three years. 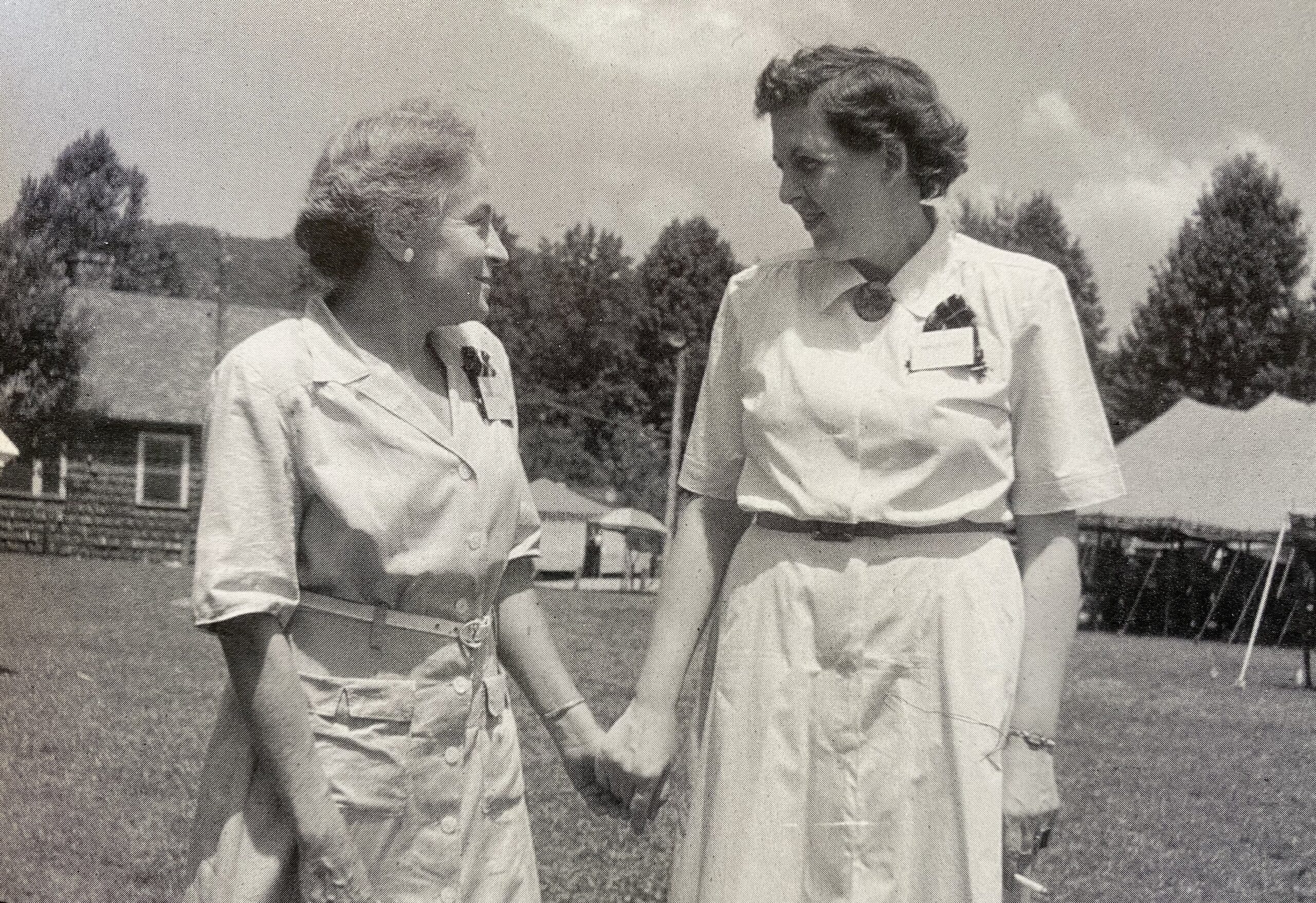 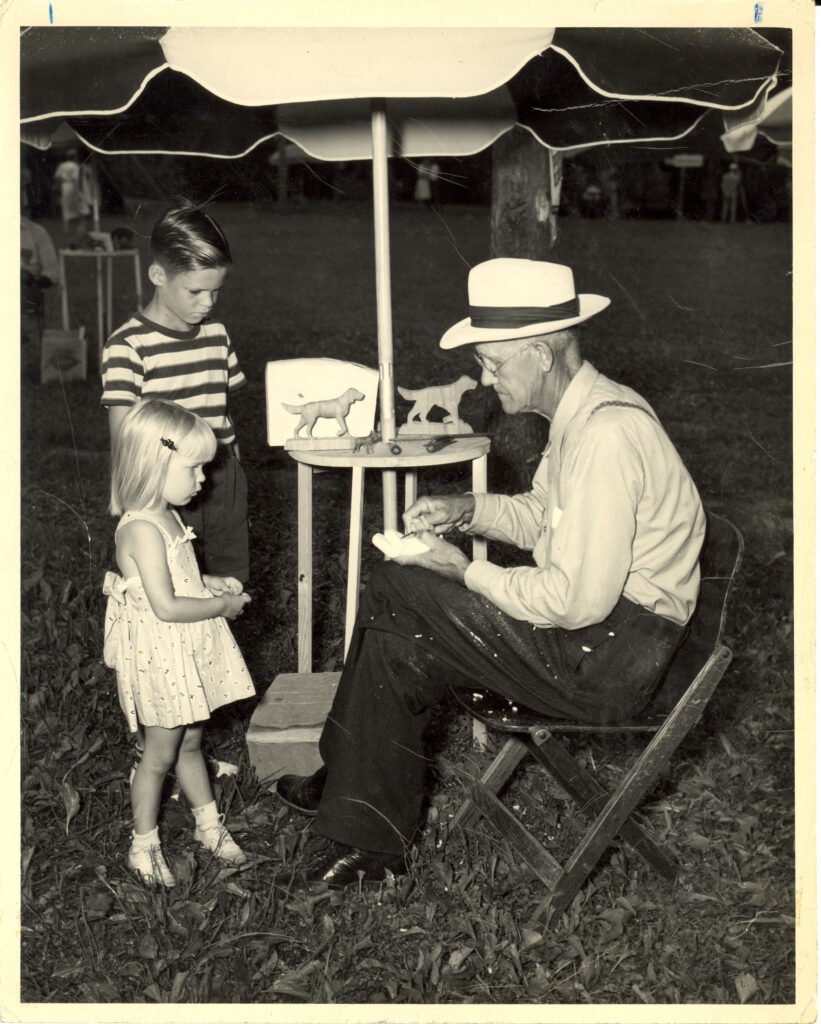 The first Craftsman’s Fair was a learning experience for everyone. Carvers were set up under beach umbrellas and tables in the open, which proved to be a bad idea for rainy days. Ben Hall was one of the first members of the Brasstown School. He was also a perfectionist who set a high standard for the group. The first large tent at the fair was dedicated to weaving and other fiber arts. Mrs. Morton and her daughter are shown setting up a loom for their demonstration. Here, the warp is being threaded through the harnesses. These two women were probably associated with the Arrowcraft Shop, which was located on the grounds of the fair. 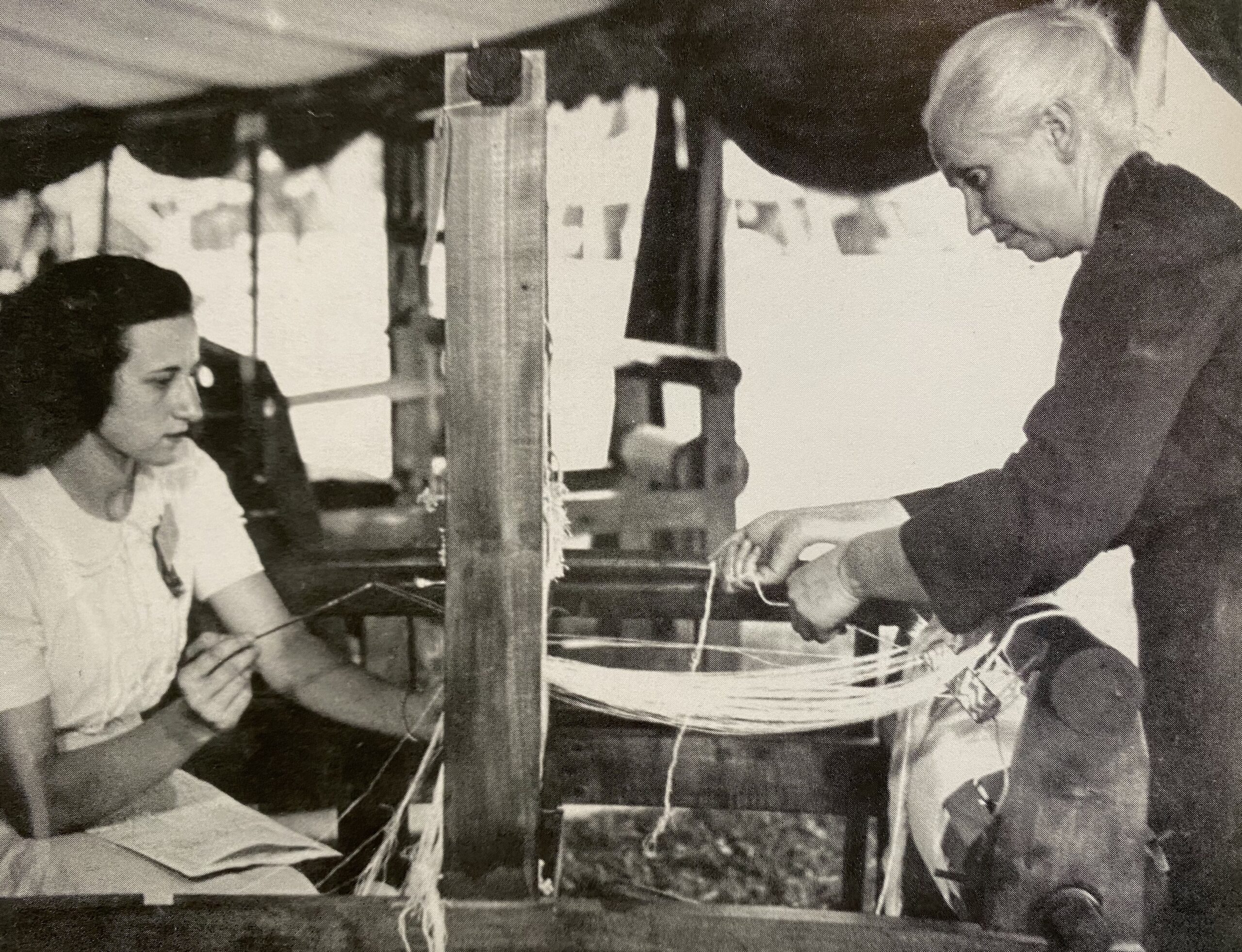 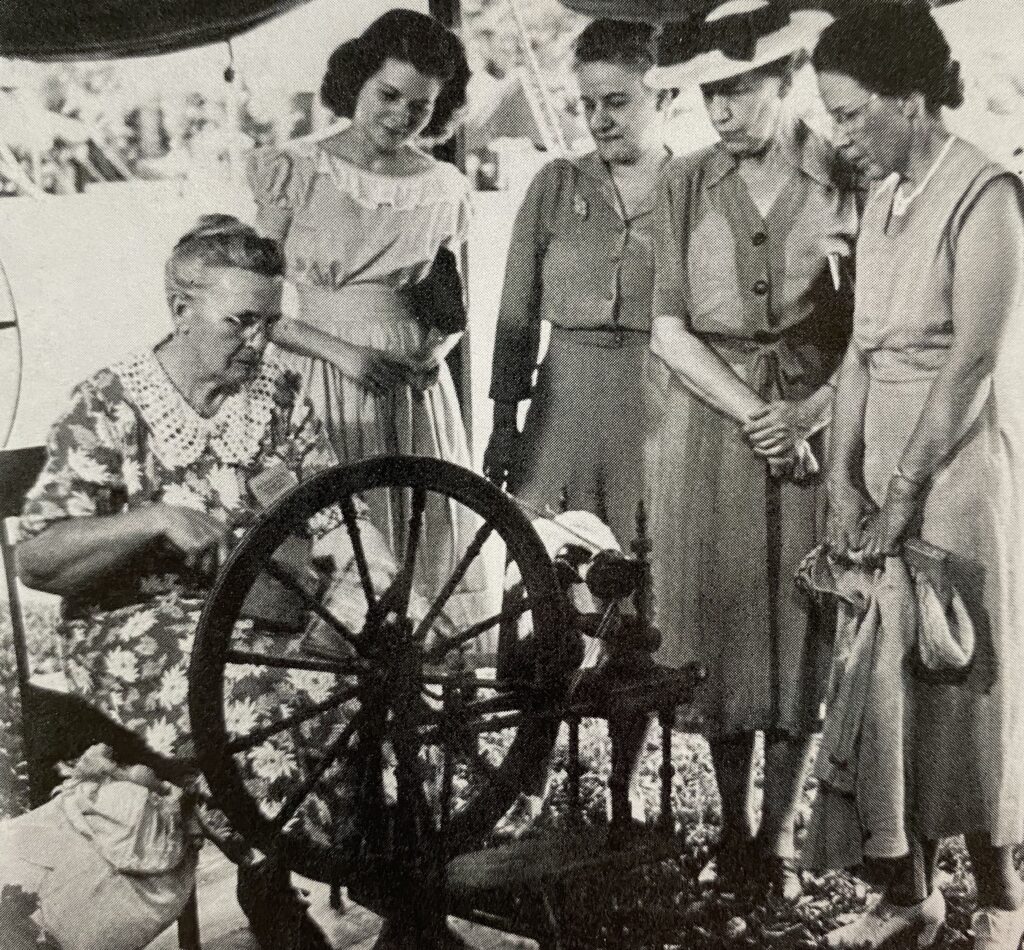 Emma Conley (seated in the image left) traveled from Penland, NC, to demonstrate the handwork necessary to create thread. Conley taught spinning and dyeing at the Penland craft school and wrote the region’s first book on natural dyes. In this photograph, she is preparing wool with hand cards to be spun on her smaller spinning wheel. A great wheel is visible in the background behind her shoulder. Rug hooking was also represented. The unidentified woman shown here is holding a sliding punch needle and working from the back of the burlap canvas. The yarn is fed through the base of the tool, and a large needle drives it through the burlap. The rug hooker needs to keep a uniform height for the loops in order to create a finished piece. 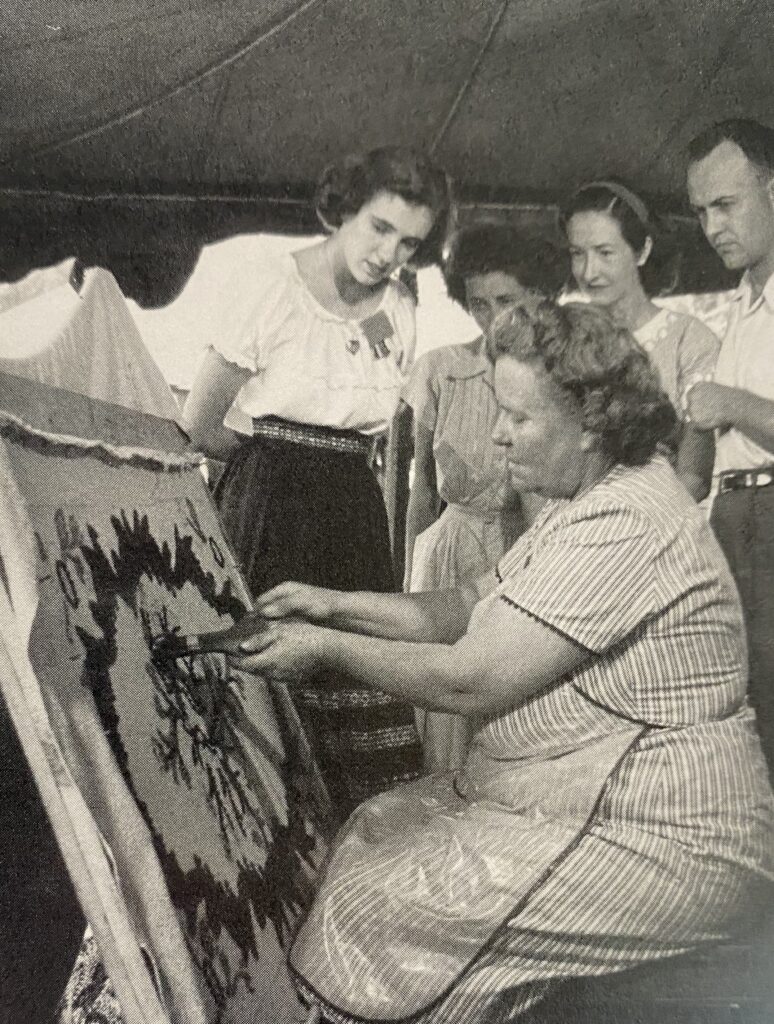 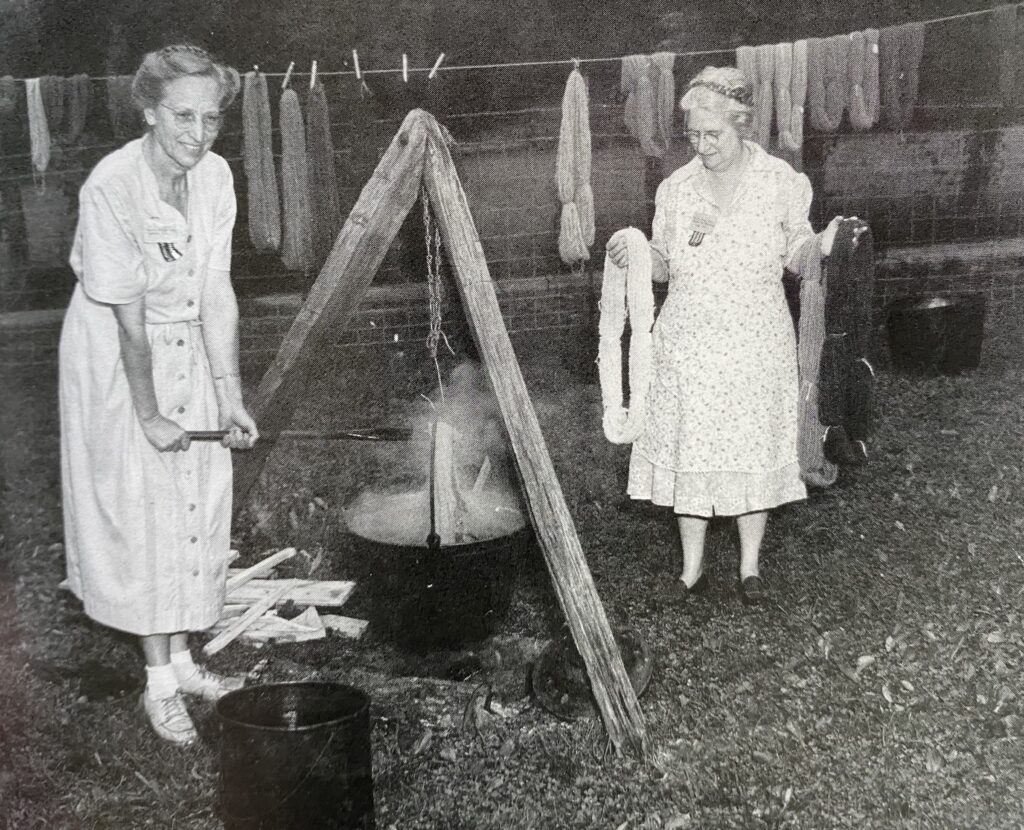 Natural dyeing became a tradition at SHCG fairs. The first dye-pot was managed by Lucy Quarrier (left) and Wilmer Stone Viner. Flowers and plants that grow naturally in the mountains were collected to create a variety of colors. The skeins of wool were hung on a clothesline, providing a vivid background. Viner managed a weaving shop in Saluda, NC. Quarrier, a weaver and dyer from Charleston, West Virginia, joined the guild in 1940.

Potters were housed in another large tent for the daylong demonstrations. The Cornelison family operated the Bybee Pottery in Bybee, Kentucky, which opened around 1809. Walter Cornelison was the fifth generation of his family to manage the pottery. Raw clay was dug from an open pit and used–without additives–to create a workable clay. 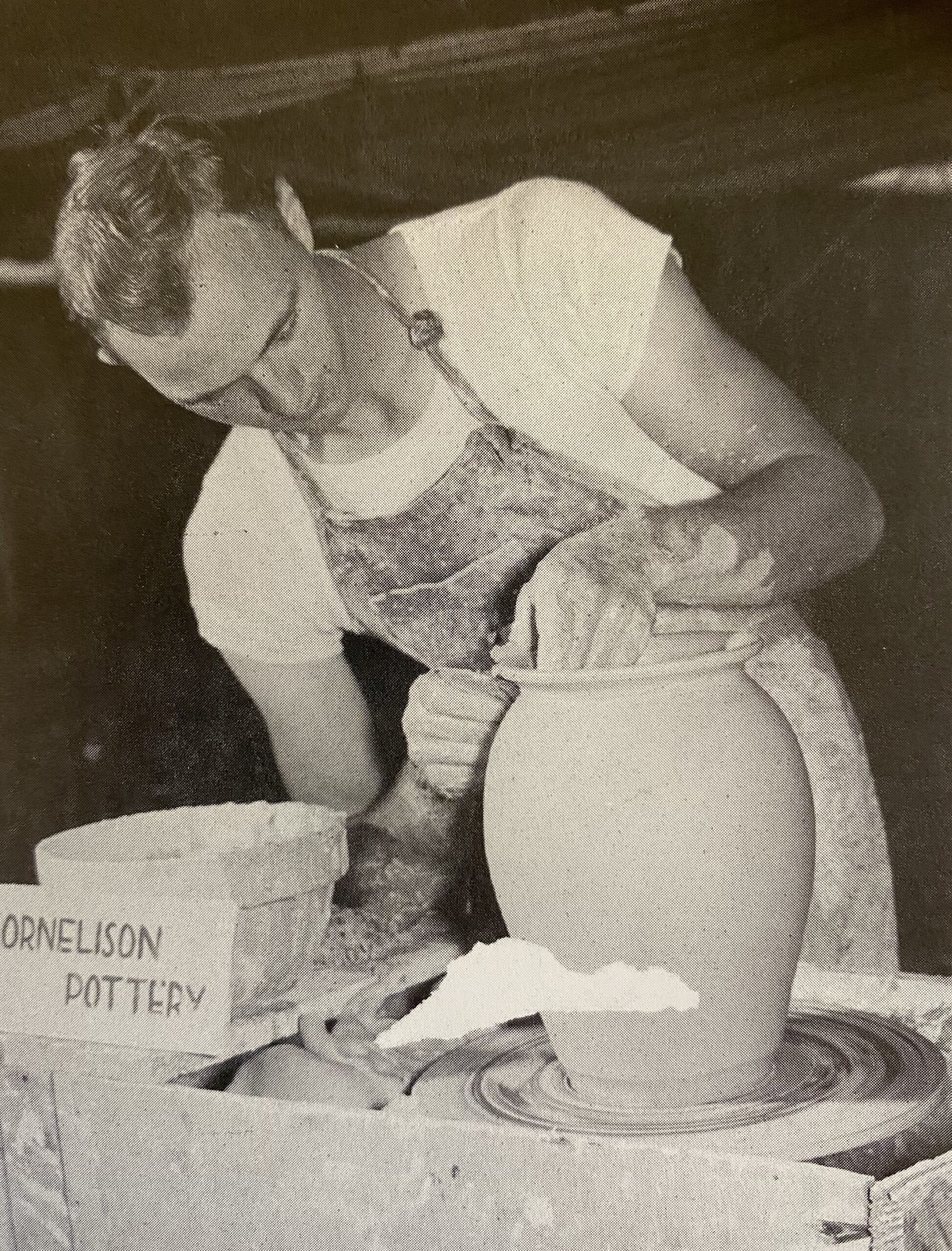 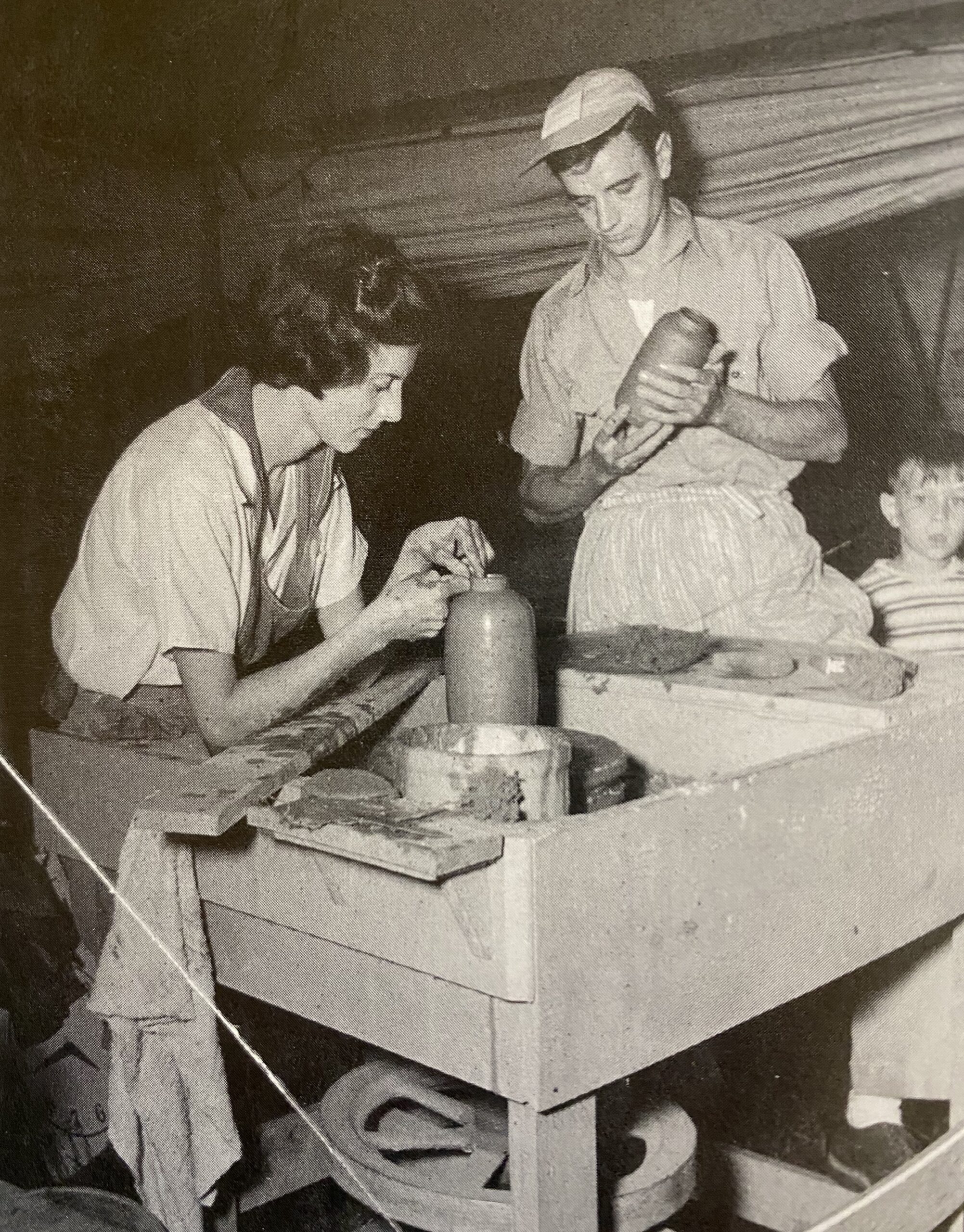 Barbara and Kennedy McDonald operated a pottery in Gatlinburg, TN. Barbara joined the guild in 1947. She had a college background in ceramics and taught pottery at the Arrowmont School of Arts and Crafts and later at Oak Ridge, TN. Barbara also served on the guild’s board of trustees. The McDonald’s children were often a part of their demonstrations. 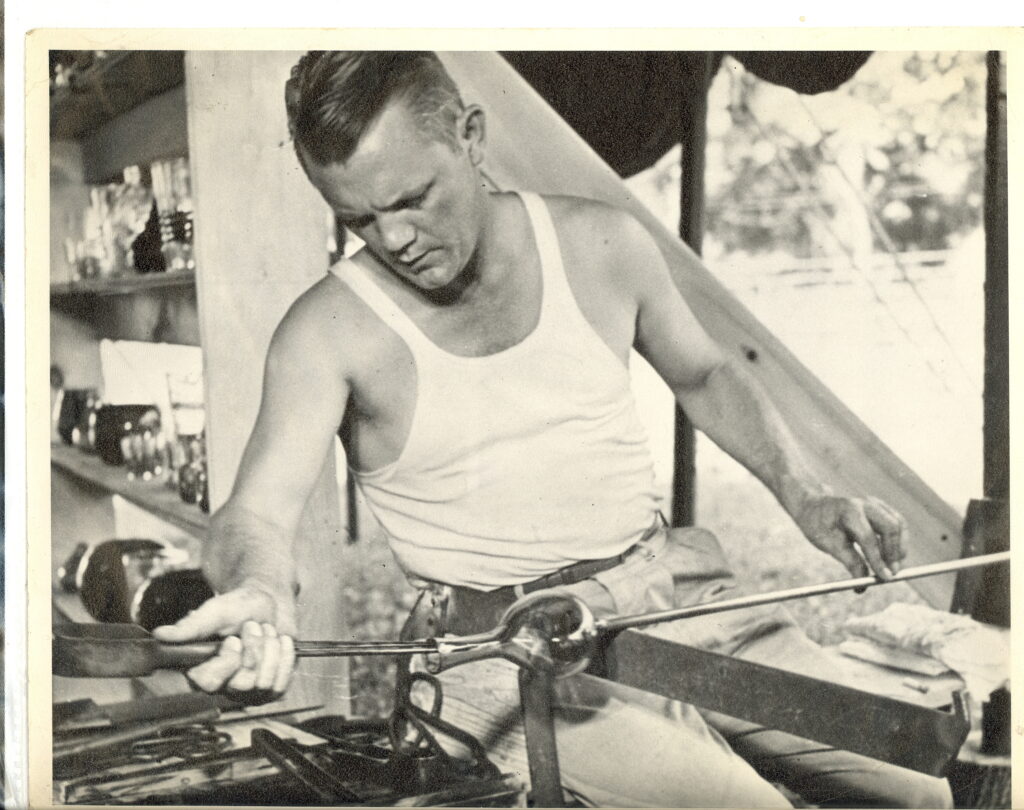 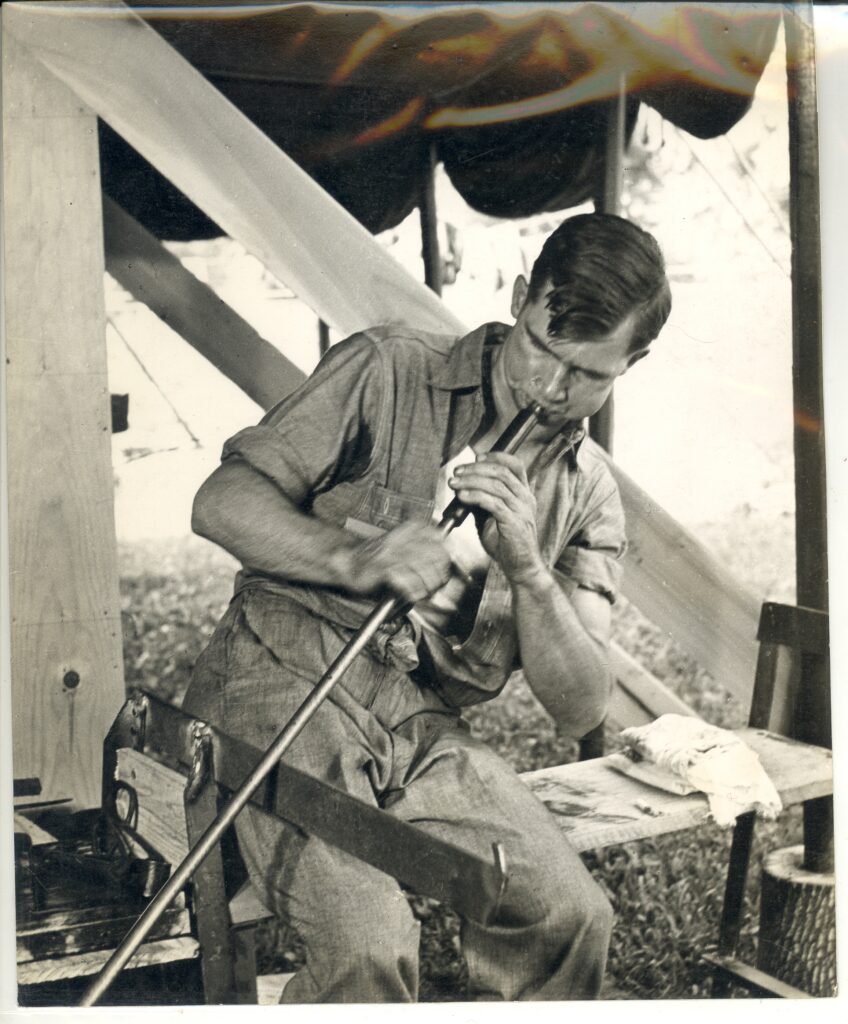 The 1948 fair was the only early fair to feature glassblowing. Workers from Blenko Glass in Milton, WV, traveled to TN to set up shop for the week. They had a popular demonstration, but the glassmakers union stepped in the cancel further participation. While it was a loss for the fairs, Blenko has continued to support the SHCG through participation and sales. In the image at the right, an unidentified worker blows through a tube to inflate liquid glass. Below, the shaping of soft glass is being done by another unidentified employee. The Blenko family has been making glass in the United States since 1893 and opened their current workshop in 1921. 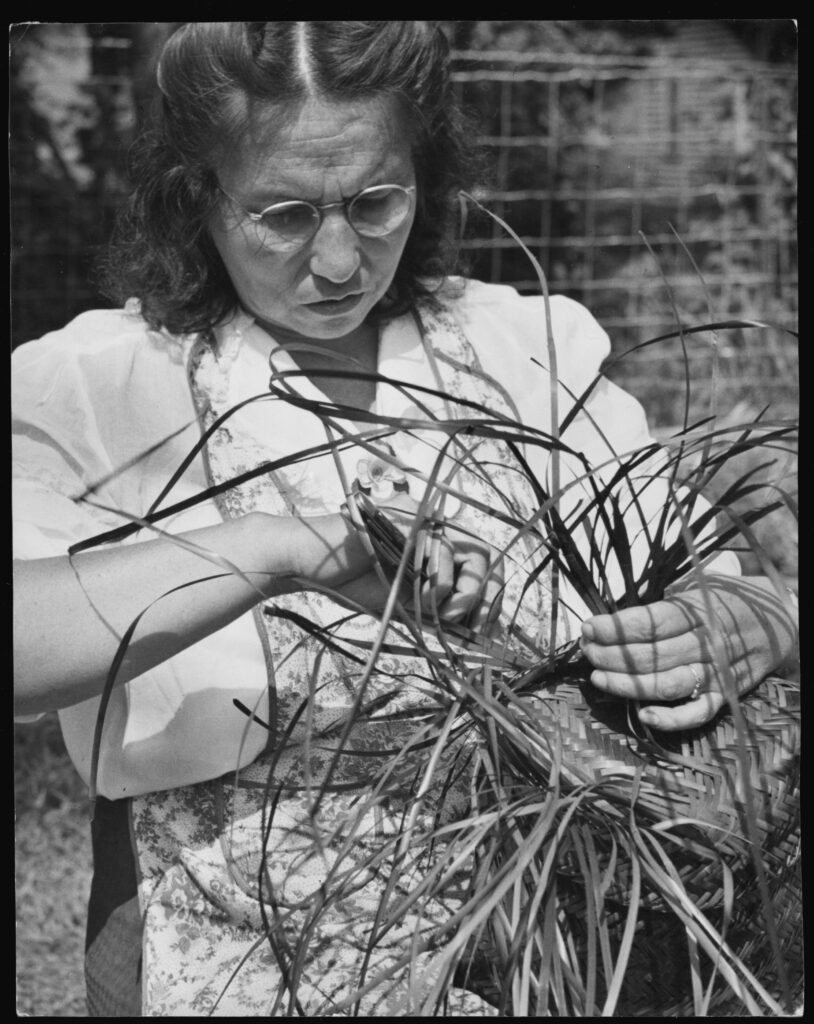 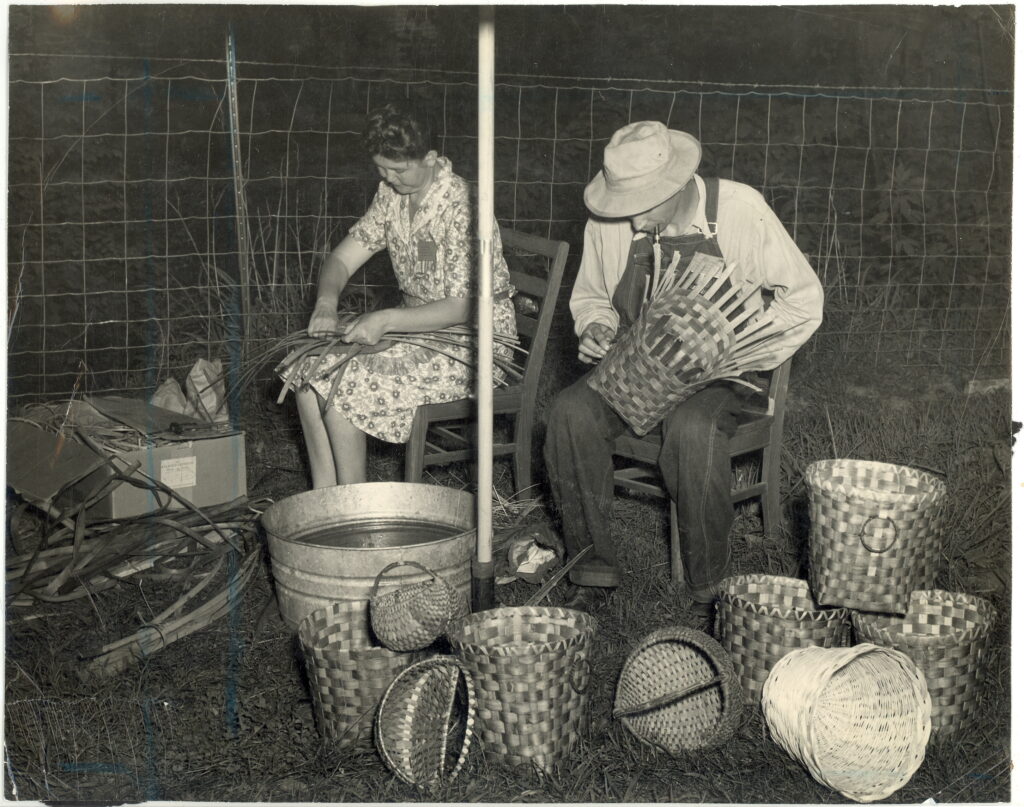 Mr. and Mrs. Matthew are demonstrating white-oak basketry, which was also done by the Cherokee. In order to make a basket, tall, straight white oak saplings were cut and stripped of their branches and bark. Splits were cut from the wood and soaked in water to soften. Mrs. Matthew is preparing the flat bottom of a basket while her husband builds up the sides of another.

Broom-making was a popular demonstration at the fairs. The Kear family had a tradition of being craftspeople in Gatlinburg, TN area. Elmer Kear was the third generation of broom-makers, and his son Omah continued the craft. Elmer is prictured above with his wife, Viola. The handles, which are made upi of broom-sedge stalks, are being curled and wrapped, then the brush ends are cut to give an event sweep. The wrapping was originally done with soft poplar bark, but synthetic products have since replaced the need to strip tree bark. Berea College also sent its students to the fair with a good supply of broom corn. 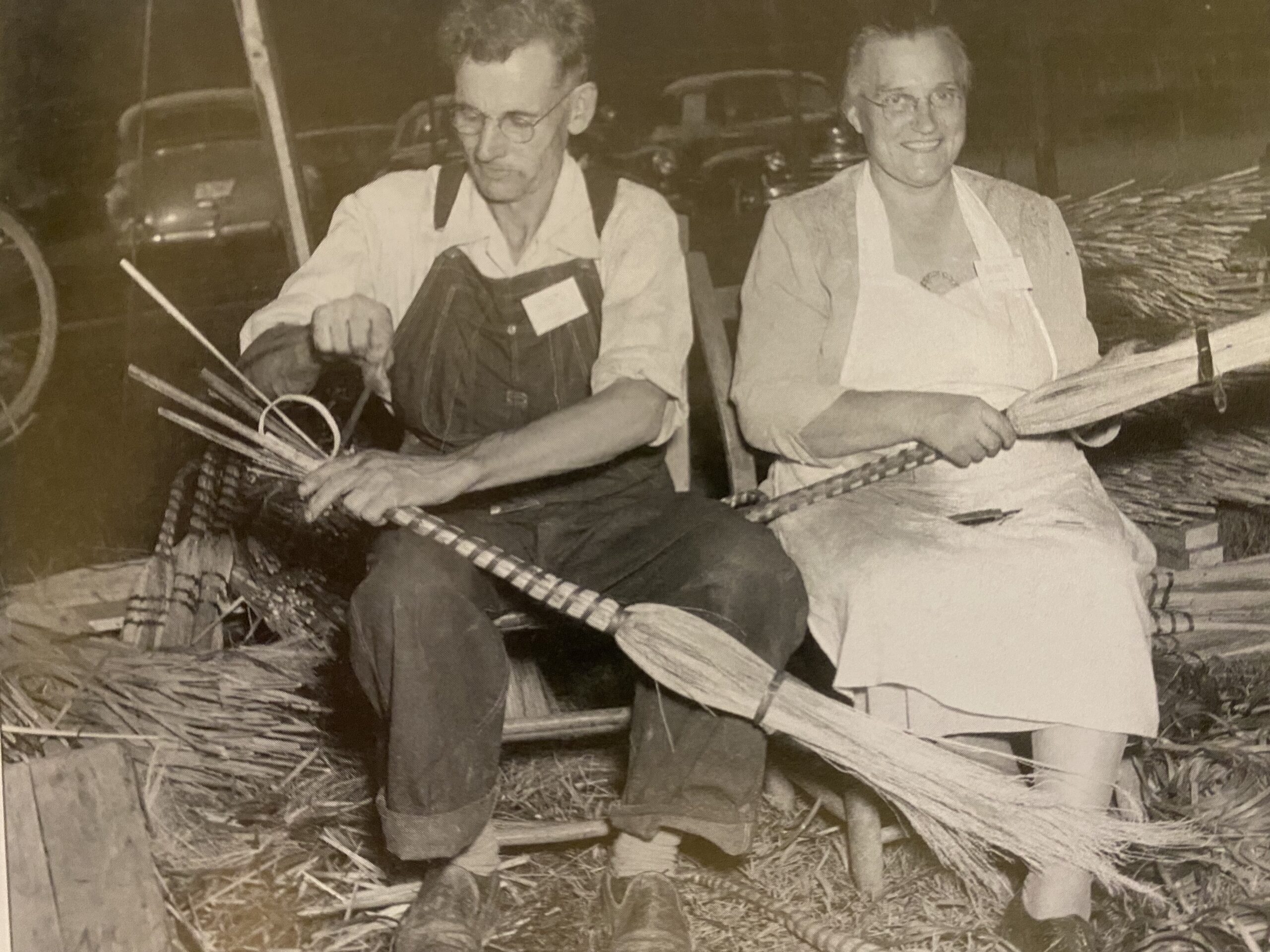