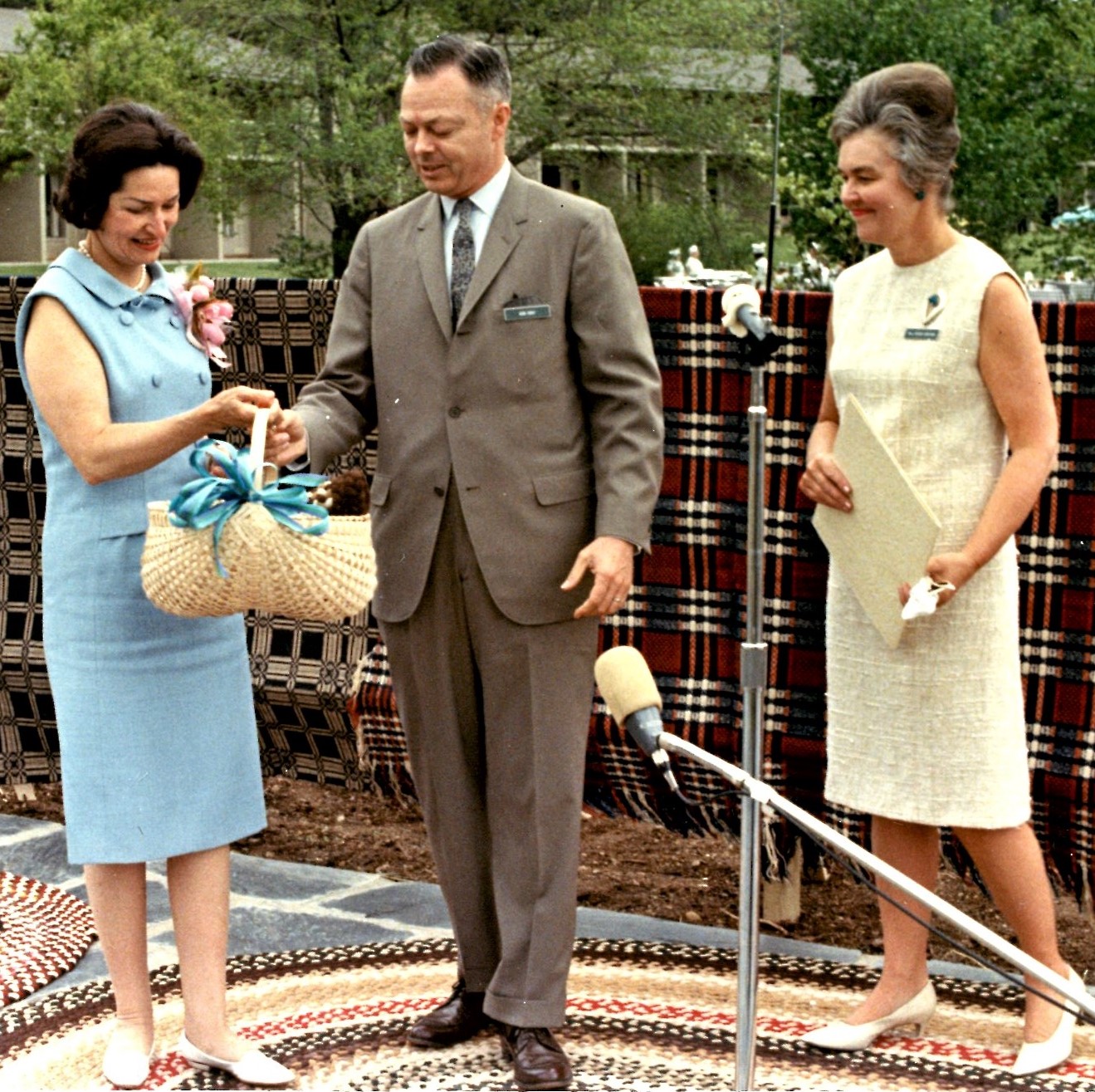 The Southern Highland Craft Guild Interacts with the White House

The Guild has had beneficial interactions with a couple of first and second ladies of the White House. In 1965, Board President Persis Grayson and Executive Director Bob Gray traveled to Washington, DC to meet with Ladybird Johnson and promote the organization. Mr. Gray must have felt awed to be in the presence of these two amazing women. Ladybird Johnson has been credited with being the driving force behind the Wilderness Act, the Highway Beautification Act, The Land and Conservation Fund, and large land acquisitions for the National Park Service. Persis Grayson was instrumental in the growth and recognition of the Southern Highland Craft Guild, serving two terms as Board President. (Persis was educated at Mrs. Ross’s School in Boston and studied with the philosopher Olav Gjelsvik in Norway. She began her career as an interior designer and then became enamored with the craft of weaving, serving as the first president of the National Weaver’s Guild. An incredibly well-spoken and graceful woman. 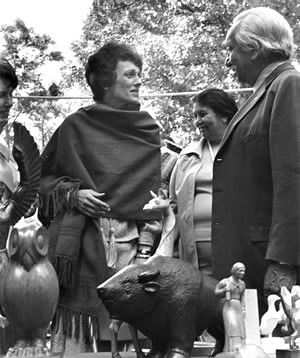 Second Lady Joan Mondale with Goingback Chiltoskey at the groundbreaking for the Folk Art Center in 1980.

In 1980 at the groundbreaking for the Folk Art Center, Joan Mondale, wife of then Vice-President Walter Mondale, was the keynote speaker. Mrs. Mondale was a lifelong practitioner, patron and advocate of the arts, an accomplished potter and a collector of craft. In 1975, she authored a book, ‘Politics of Art’. She is pictured below with Goingback Chiltoskey and a selection of work from the Qualla Arts and Crafts Mutual Cooperative. Qualla, the nation’s oldest Native American craft cooperative, was founded in 1946. Today with over 250 members, the cooperative strives to preserve and promote the arts and crafts of the Eastern Band of the Cherokee Indians. Qualla has been a member of the Southern Highland Craft Guild since 1949.

Goingback Chiltoskey was one of the founders of the Qualla Cooperative and became a member of the SHCG in 1948. During World War II, Chiltoskey created wooden models for the US Army Engineer Research and Development Laboratory.  Before and after the war, he worked as a teacher, instructing high school students and military veterans in the craft of woodworking. He also taught woodworking techniques to his niece, celebrated sculptor Amanda Crowe.  His work is included in the Permanent Collection Gallery at the Folk Art Center, the NC Museum of Art, and the National Museum of the American Indian.