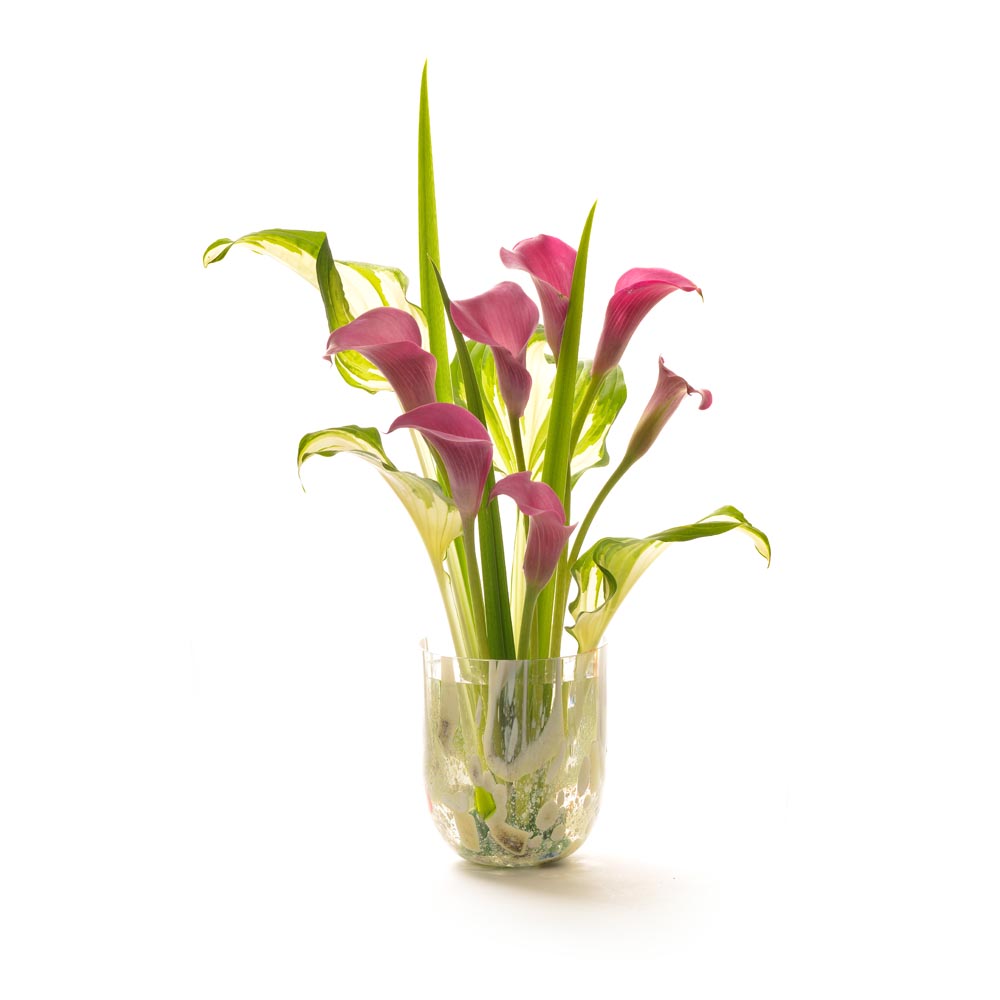 Jim lives and works in the beautiful foothills of the Appalachian Mountains in Lenoir NC. He is largly self taught and continues to experiment with trying to bring the beauty and utility of Glass into daily life through his art.My influences include both the natural and undersea world both here in NC and also the Caribbean.

He lived in DC until the age of 1 when his family moved to suburban Maryland. James lived in Rockville, Md for the next 20 years. He met his future wife, Gail, in high school. They were the prototypical high school sweethearts. After High school, James enrolled in Montgomery College and joined the Army Reserve. He also around this time 1972 married Gail. After a few years of supporting the family, Gail decided that Jim should find a job. He then became an apprentice in the local Electrical Union, and remains a Union member to this day. In 1976 two major events shaped their futures, the first was the birth of their daughter, Kelly. And the second was Jim becoming employed by the Washington Transit System.

A few months prior to the birth of their daughter, Jim took a class in Stained Glass. He had developed an interest in Glass at an early age from the beautiful Stained Glass windows in his church. He made his first piece as a commemoration of the birth of Kelly and his long journey in glasswork was begun.

Over the course of the next two decades the Burchett’s moved to the rural exurbs of DC and had a son, Joshua, Jim continued with the Transit system and worked on his glass as a hobby. He made several works for his home and also a number of private and ecclesiastical commissions.

As the children grew and moved out on their own, Jim and Gail developed an interest in travel and took up SCUBA diving, which has become another passion. They also developed a deep love for the Caribbean and ultimately bought a home in St.Lucia where they spend several months a year.

In 2003 Jim retired from the Transit System and decided to explore his art more fully. In 2005 they relocated to Lenoir and Jim was able to equip his new home with a full studio to really pursue his art. He left the restrictions of Stained Glass behind and moved into the area of Kiln Formed Glass, which allows a much less restrictive mode of expression. He is striving to combine his appreciation for nature and especially the undersea world with the utility of Glass objects to expand people’s appreciation for the art in their everyday lives.

In early 2008 Jim entered the next exciting phase of his life as he has become a .Grandfather for the first time. Since then he has gotten another grandson, a Son-in-Law, and membership in the Guild. Life is good and He hopes to enjoy it for many years to come.

When did you first start making your craft?

I first began making Stained Glass items in 1972 and pursued that as a hobby for the next 25 years or so. I transitioned into kiln formed glass to get away from the rigidity of design dictated by the lead lines in the stained glass art forms. So I have been exploring kiln forming glass for about 20 years, seriously for the last 15.

What do you draw inspiration from?

I draw inspiration from nature. The mountains of NC, the beauty of the Caribbean, and the wonders that reside under the Sea are all interpreted in my work

How do you incorporate flowers into your work?

There are many ways to incorporate flowers in this medium. In this case I am showing pieces that are just using glass frit to make a flower colorscape, the vase’s are designed to complement the flowers that will be displayed in them. I also incorporate the “ghosts” of flowers by firing actual flowers onto the glass to make Fossil flowers.

When did you join the Guild and why?

I joined the Guild in 20 10, primarily for the Marketing opportunities it provides, but also for its mission to promote arts education and the preservation of craft that is indigenous to the Appalachians

What is your favorite part of being a Guild Member? What is your participation in the Guild?

I enjoy attending the Shows, and marketing my materials at the Guild shops. I intend to do demonstrations in the future if I can ever figure out how

Do you teach workshops?

Unfortunately, I do not have the temperament to teach…I can do it one on one but that’s about it