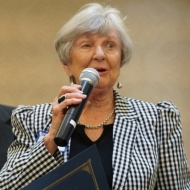 Georgia Bonesteel
Fiber•https://www.georgiabonesteel.com/
This user account status is Approved
About About
Gallery Gallery

Quilting has been essential to my life for over 50 years. Making a quilt is one thing, but passing on how they can be made became my mission, most notably on public television on the Lap Quilting with Georgia Bonesteel program. I’m still teaching and creating and loving it!

I was born in Sioux City, Iowa and because my father was an attorney with the US Justice Department growing up meant many moves. I attended 11 different schools before college at Iowa State University, in Ames, Iowa (Clothing & Textiles major) and Northwestern University, Evanston, IL with a BA in Home Economics.

In 1959 I married Peter Bonesteel in Wilmette, IL and after living in Minneapolis, MN, Tulsa, OK and New Orleans, LA we settled in Flat Rock, North Carolina in the early 1970’s. I have been blessed with my three children, Jonathan, Amy and Paul and nine grand children.

With more than three decades of traveling behind me, my life now keeps me closer to home to be with Pete and family. Week long retreats at the JC Campbell Folk School and the Nine Quarter Circle Ranch in Montana continue to be two of my favorite teaching and learning experiences.

My 12 PBS series of half hour Lap Quilting shows aired nationally since 1975 and some are available in reruns on YouTube with more to come.

Crafts by Georgia Bonesteel view all