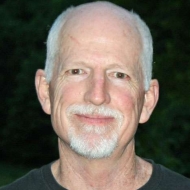 From my forge in the Great Smoky Mountains of North Carolina into your hands, my custom handmade knives will meet the demands of backwoods camping, all-purpose carry, the working kitchen, as well as make an elegant presence in a display case. Because every knife I create is crafted, from start to finish on my anvil and in my forge, I can accomplish my own artistic blade and handle design or accommodate a customer’s specific request for a uniquely forged knife.

From a demanding daily 3-hour commute to and from Pennsylvania Avenue in Washington, D.C. to walking out into my backyard to get to work, my career life has changed dramatically since moving to the Great Smoky Mountains of North Carolina in 2006. I have traded-in a view of the U.S. Capitol for a mountain landscape - complete with cattle and an occasional elk.

When I left D.C., I was the director of an engineering and security program for a trade association in the energy industry. Today, the “heat and pressure” I operate under isn’t focused on industry policy and regulation, but instead upon each bar of 1500-degree steel that I heat, hammer, and shape. Indeed, the rewards of being a bladesmith aren’t measured in monetary gains or power grabs, but in the honest, simple satisfaction of creating functional works of art. My knife making journey began in 2008 when I attended the American Bladesmith Society (ABS) Smoky Mountain Hammer-In at the Haywood Community College (HCC). I had read several books on forging knives during my daily train commute into the District, but back then I believed that investing my energies into building a forge would be overwhelming - due to the little leisure time I had. But after moving to rural North Carolina, participating in a local Hammer-In, and finally forging my first working knife, I was ready to begin the journey.

In June of 2012, I earned the American Bladesmith Society Journeyman Smith rating. Currently, my knives can be found in the pockets of mountain folks in N.C., on kitchen cutting boards in California, in the green fields of Great Britain, in the rugged alpine of Switzerland, as well as in display cases in Asia.

Crafts by Ken Hall view all